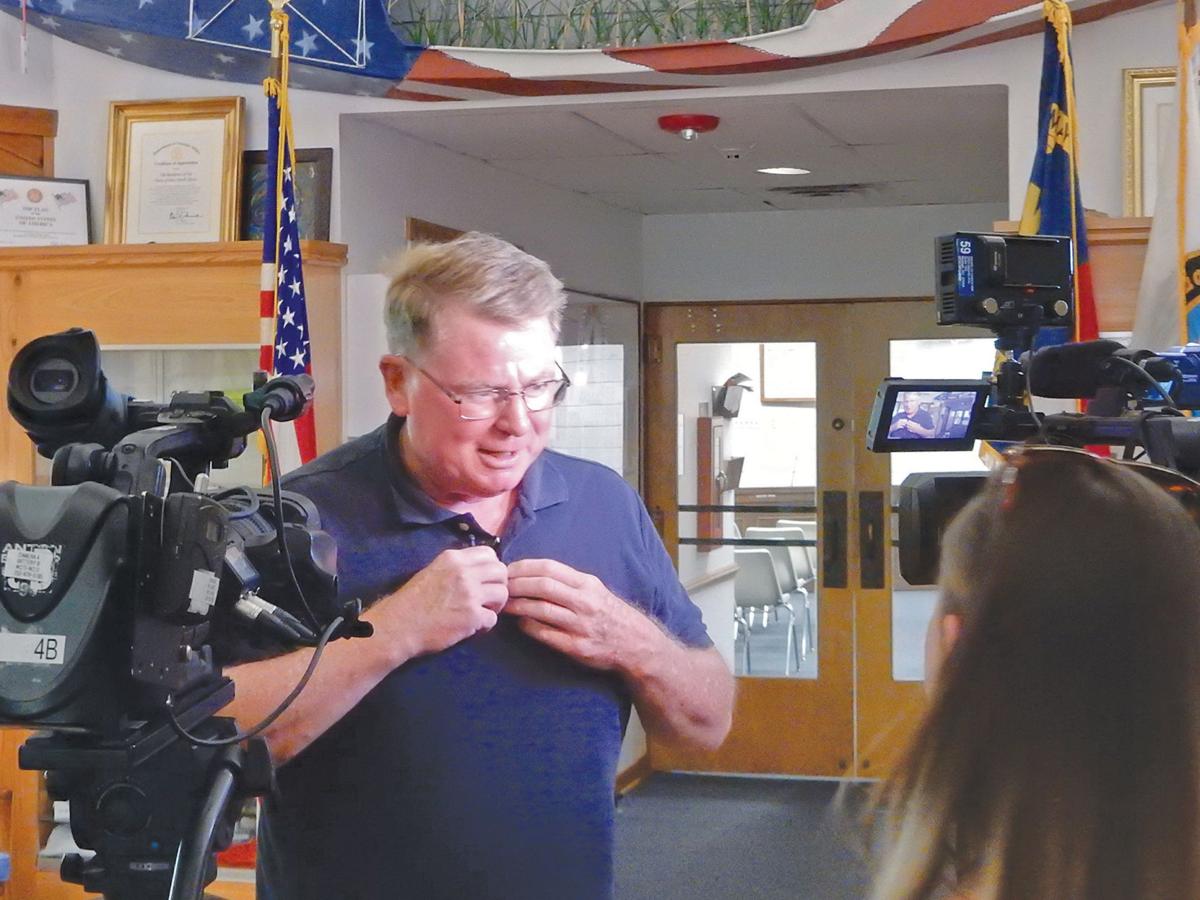 Pine Knoll Shores Mayor Ken Jones prepares Wednesday to give a statement on beach safety to the press at town hall. A man drowned Sunday in the water off Pine Knoll Shores, the seventh drowning in Carteret County this year. (Mike Shutak photo)

Pine Knoll Shores Mayor Ken Jones prepares Wednesday to give a statement on beach safety to the press at town hall. A man drowned Sunday in the water off Pine Knoll Shores, the seventh drowning in Carteret County this year. (Mike Shutak photo)

The mayor met with media representatives Wednesday in town hall at 100 Municipal Circle to make a statement regarding beach safety.

The announcement comes in the wake of the death of Earl Foster Jr., 38, who drowned Sunday in the ocean off Pine Knoll Shores. Mr. Foster, a teacher from Guilford County, was one of four swimmers in distress at the time. The other three were children, who were rescued by first responders and Good Samaritans. All three children survived.

“We offer the strongest condolences to the family and friends of Earl Foster,” Mayor Jones said, standing in front of reporters from the News-Times, Spectrum News, WITN and News Channel 12. “We’ve experienced an unusually high number of deaths (off Bogue Banks) before Memorial Day.”

Mr. Foster was the seventh person to drown off Carteret County beaches this year prior to Memorial Day, the traditional beginning of the summer tourism season.

Mayor Jones said town staff and residents have been making efforts to inform beachgoers about the beach warning flag system.

The system uses colored flags posted at each of the 11 public beach access in town, as well as at town welcome signs on either end of Pine Knoll Shores, to inform people of potentially dangerous ocean conditions that may make it unsafe to swim. Pine Knoll Shores Fire Department staff also began patrolling the beaches in the middle of May, their beach vehicles equipped with warning flags, as well.

The Pine Knoll Shores warning flags and their meanings are as follows:

“We had red flags posted at the time (of Sunday’s drowning),” Mayor Jones said. “We’re doing everything we can to communicate this (warning system) and educate the swimmers.”

“We make sure we coordinate with as many people in town as possible,” the mayor said, “but we need to work together with other towns.”

Mayor Jones said in the event of an emergency, each public beach access is posted with a sign identifying the access by number. This is so anyone calling for emergency services can tell them which beach access they’re at.

“This saved a life on Easter,” the mayor said.

While two towns, Atlantic Beach and Emerald Isle, have lifeguard programs, Pine Knoll Shores doesn’t. However, Mayor Jones said town officials are “trying to look down the road” at the possibility of hiring lifeguards in the future.

“I was told a truck of lifeguards from Atlantic Beach came and helped with the kids out (Sunday),” the mayor said.

“We’re trying everything we can,” Mayor Jones said. “We need to save lives, that’s the bottom line. The more vigilance we have, the better.”