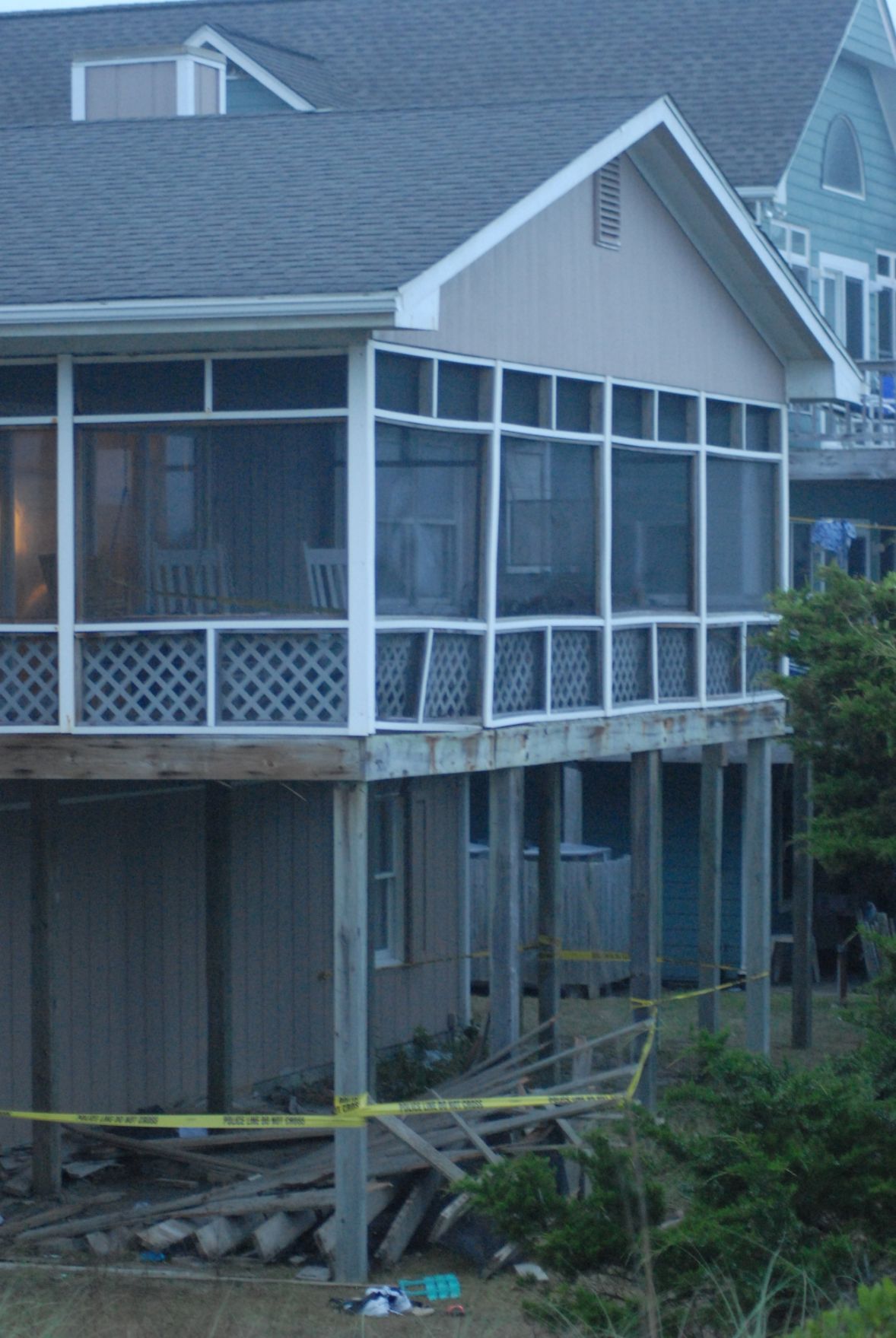 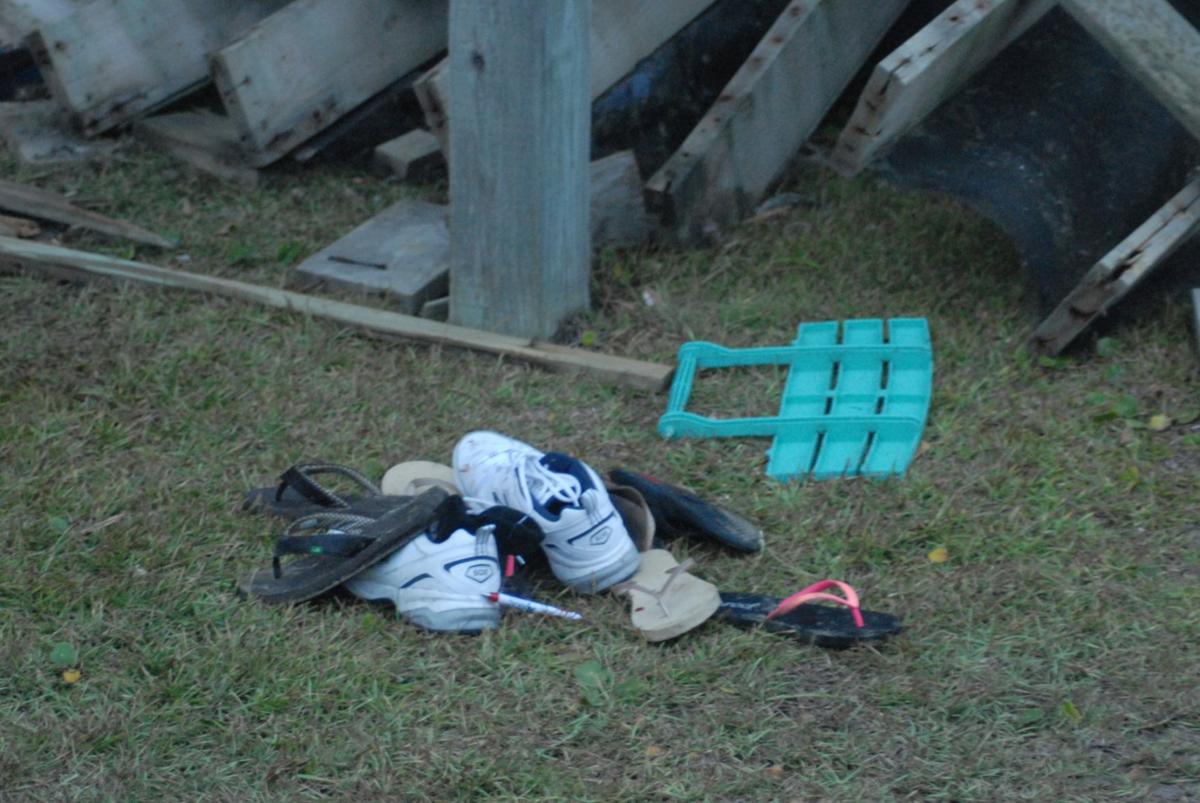 Shoes and household goods sit in front of timbers meant to hold up the floor of the screened, second story patio at 4403 Ocean Drive in Emerald Isle shortly after a deck collapse Saturday night. (Jackie Starkey photo)

Shoes and household goods sit in front of timbers meant to hold up the floor of the screened, second story patio at 4403 Ocean Drive in Emerald Isle shortly after a deck collapse Saturday night. (Jackie Starkey photo)

The rental home has been posted "unsafe" since the accident.

The floor joists and deck boards of a second story, screened porch at 4403 Ocean Drive, collapsed due to the decaying fasteners. Support pilings and other structural components remain intact, according to a press release from the town. The  preliminary review by the building inspector states the deck would have met current construction standards, but the fasteners were deteriorated.

The area that collapsed was approximately 12 foot by 12 foot in size, and located about 14 feet above ground.

No names or ages have been released following the accident. The family has requested privacy, according to the town press release.

The group was composed of a large extended family that was vacationing in several different rental homes in Emerald Isle, but had congregated at the house at 4403 Ocean Drive. Most of the family lives in northern Virginia. The group was preparing to take photos together when the deck collapsed, according to reports.The group was set to check out of the Bluewater Vacation Rentals property Sunday morning. Mr. Rush reported the entire group has since left the town.

Bluewater Vacation Rentals issued a statement expressing concern for the family. "Our thoughts and prayers are with the family and others for injuries received as a result of this horrible accident. We are asking everyone in this community for their prayers and support for the family."

Fourteen people were transferred via emergency crews, according to Emerald Isle emergency officials. Three were critically injured after the screened, back patio of 4403 Ocean Drive fell through around 7 p.m. The family was posing for a photo at the time of the collapse, officials said.

Carteret General Hospital told the News-Times Sunday morning they had treated 22 total, while six were transferred.

The identities of those injured have not been released.

A triage station was set up at Salter Path Ball Park to assist in treatment and helicopter landing.

“This is really tragic,” Emerald Isle Mayor Eddie Barber, who was on scene, told the News-Times. “Our thoughts and prayers are with those injured, and well-wishes to their families.”

Individuals on scene identified as occupants of the house by emergency personnel declined to comment Saturday night.

As of 8:30 p.m., Ocean Drive was closed to vehicular traffic between Howe and Carolyn streets while crews observed the scene.

Officials told the News-Times the investigation into the patio collapse is ongoing and no details were immediately available as to the cause.

The house, a Bluewater Real Estate listing, was occupied by renters at the time of the collapse. They were set to check out Sunday, according to emergency officials.

Helen Outland contributed to this report.

Of the 14 people injured, three were in critical condition, according to Emerald Isle Fire Chief Bill Walker.

A triage station was set up at Salter Path Ball Park. One person was flown to New Hanover Regional Medical Center in Wilmington, and another to Vidant Medical Center in Greenville. The other patients were taken to Carteret General Hospital in Morehead City.

The road is currently closed to vehicular traffic along Ocean Drive, between Howe and Carolyn streets.

There were no immediate details on how the structure collapsed, but an investigation will take place according to emergency responders.

Chief Walker said the house was currently occupied by renters, who were set to check out Sunday morning. There is no word on the identities or hometowns of those injured at this time.

Not to pre-judge what officials will determine, but the photo of the collapse clearly shows the floor joists were running parallel to the house wall -- an absolute no-no -- they should be perpendicular and tied to the house. If that's so and it escaped original construction inspection or the owner's proper due diligence, it is beyond unforgivable. Here come many negligence lawsuits.

Which direction the deck joist run is irrelevant...

the life span of a galv nail in coastal NC that is used out side is not very long. I am surprised that someone has not figured that out yet. Doesn't hurt to use bolts (SS) on the outside joist either.

It IS relevant if the joists are only tied at their ends and do not rest on cross-beams. Let's just say relying only on nails to hold them up -- as has been reported here -- is/was a cheap and dirty way to do it. More so with a surface that's 8-10 feet off the ground.

Preliminary report indicated the deck was built to current code. Failure of hardware most likely cause, probably galvanized nails on joist hangers which is how most decks are built. Are decks rated for load carrying ability?

Wood treatment and hardware composition may be factor.

Let's settle the question of codes, joist orientation, etc. this way: Using hangers only for joist support to a deck surface that's well above ground is just plain foolish. And yes, as "dc" has suggested, a ledger indeed is what should be there no matter whether you run the joists parallel or perpendicular. I believe you will find the current code calls for there to be additional support beneath the ends of joists, even if you use hangers. Further, adding support via beams or additional cross support to an existing deck is not a major project, and it should be there particularly in environments subject to salt air corrosion. This was an accident that could have been prevented. End of editorial.

I never had a question of the codes. All I said was that joist orientation was irrelevant... However, if there is any questions about how to do it right ( which is above code. The " Code " is the minimum requirement. ), I will elaborate...

Post must be anchored by one of several different methods. Each is site/plan specific... All bands must be attached to the post. Again, there are several accepted methods that fall within the code. Two of the most common are 2 bolts through the post and band, or mending straps of a high grade galvanize, or stainless. I prefer the mending straps because they do not penetrate the post entirely...

If a band attached to the structure will carry joist burden it must be attached with nails, and bolted every 4 ft, by a through bolt into the structure floor system. This is often difficult on repairs/additions. In some cases the Inspector can allow leeway if the method used is sufficient to carry the stress load...

Another method is to drop the joist into the girder system using joist hangers, and ledgers. Ledger dimensions may vary from site to site. Joist hangers are recommended with, or without ledgers. Likewise, ledgers are recommended with, or without joist hangers. Some locations allow either, and some allow both. I use both hangers, and ledgers because not only does it increase load support, the hangers reduce deck expansion. Joist must also be attached to the girder in accordance with local code.

Fastener selection is relevant to material, and location. Some areas allow the use of galvanized fasteners, or ceramic coated exterior deck fasteners ( usually screws ). Other require stainless. Galvanized and pressure treated wood do not mix. Too many metals eating at each other.

Even if it was built to code, it was over 30 years old, and on the beach. Between electrolysis, salt corrosion, dried out aged wood, and too many people is too small of a place, this deck was bound to fail...

An inspection, and maintenance might have prevented the collapse. Make sit kind of hard to call it an accident...

Good stuff, clammerhead. I think we both agree -- based on the photos of the collapsed section -- that the joists appeared to have no additional support perhaps beyond nailed hangers. That's awfully risky to keep in place despite its possible code compliance many years ago. Maybe this discussion will lead to other folks living in the area to closely examine what they have and to retrofit where necessary.