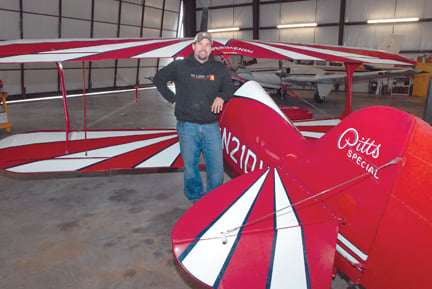 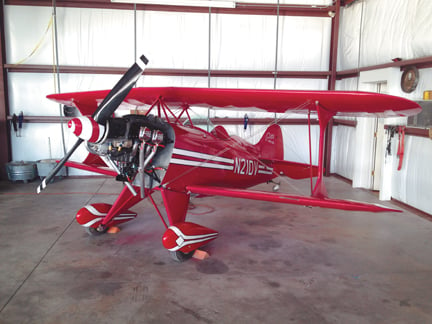 One visually stunning feature of the restoration is a barber pole-inspired nose cone. (Contributed photo) 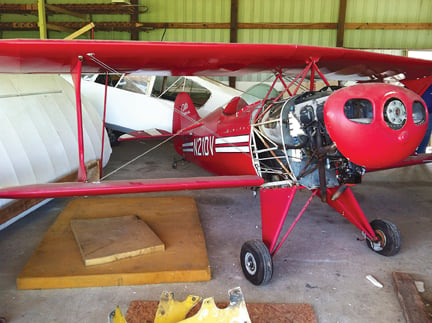 This is the experimental Pitts Special S-1S single-seat, open cockpit, aerobatic biplane before Keith Snyder’s restoration effort. It was stored in a hangar, shown here, at Spud International Field, a grass strip in northern Carteret County, by its former owner, the late Robert Parham, of Newport. (Beth Blake photo)

The original instrument panel for the plane, left, is replaced in the restored aircraft with one shown at right that accommodates an Apple iPad that provides modern avionics. (Contributed photos) 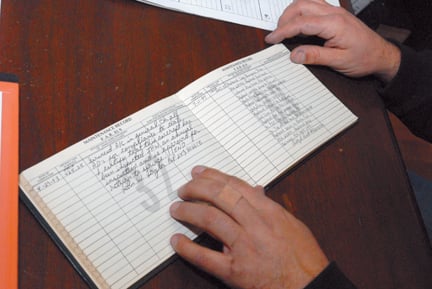 The logbook for the Pitts provides information about the maintenance history of the plane, which before the recent restoration was last serviced in 1997. (Mark Hibbs photo) 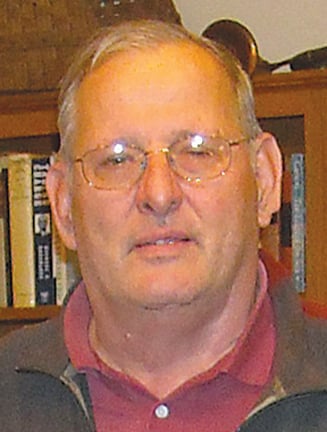 The Pitts Special used to belong to Robert Parham of Newport, who died April 13 at 65. (Beth Blake photo)

One visually stunning feature of the restoration is a barber pole-inspired nose cone. (Contributed photo)

This is the experimental Pitts Special S-1S single-seat, open cockpit, aerobatic biplane before Keith Snyder’s restoration effort. It was stored in a hangar, shown here, at Spud International Field, a grass strip in northern Carteret County, by its former owner, the late Robert Parham, of Newport. (Beth Blake photo)

The original instrument panel for the plane, left, is replaced in the restored aircraft with one shown at right that accommodates an Apple iPad that provides modern avionics. (Contributed photos)

The logbook for the Pitts provides information about the maintenance history of the plane, which before the recent restoration was last serviced in 1997. (Mark Hibbs photo)

The Pitts Special used to belong to Robert Parham of Newport, who died April 13 at 65. (Beth Blake photo)

BEAUFORT — Vintage cars and classic motorcycles increase in value and desirability usually based on their rarity and performance capabilities and, for aviation enthusiasts and collectors, the same holds true for aircraft.

Kevin Snyder, owner of Tailwind Aviation in Hangar 84 at Michael J. Smith Field, has for years dreamed of owning and flying a hot rod airplane. That dream is now coming true – thanks to a little detective work, groundwork laid by a former airplane owner, some good luck, hours of effort and help from student volunteers.

Mr. Snyder, a licensed airline transport pilot and aircraft inspector, is in the final stages of restoring the winged equivalent of a legendary performance muscle car, an experimental Pitts Special S-1S single-seat, open cockpit, aerobatic biplane. The plane, which hadn’t been flown in decades, is a 1977 model and a rare example of the lightweight and agile design that has changed little since its creation in 1944.

“The Pitts is comparable to a ’67 Camaro,” Mr. Snyder said last week, referring to Chevrolet’s first high-powered, lightweight model that, along with the previously introduced Ford Mustang, created a new class of compact, sporty cars. “It’s one of those airplanes everyone dreams of owning.”

With a 180-horsepower, horizontally opposed four-cylinder, air-cooled Lycoming IO-360 engine in a lightweight frame with fabric-covered wings, the plane weighs in at only about 700 pounds, making it a favorite among enthusiasts.

Designed by Curtis Pitts, who died in 2005 at 89 in Homestead, Fla., the plane was called “revolutionary” by the Smithsonian Institution’s National Air and Space Museum in Washington, D.C., because of the small size, light weight, short wingspan and “extreme agility.”

According to one source, a company called Aerotek built only 61 Pitts S-1S models in the 1970s, but plans and components for the aircraft are now available from another firm: Aviat Aircraft.

Pitts biplanes dominated world aerobatic competitions in the 1960s and ’70s and are still considered competitive in certain categories.

Mr. Snyder has logged about 4,000 hours flying “all kinds of different airplanes” and about 10 hours flying aerobatics, but he said this plane is different and requires specialized training.

“The Pitts is its own special little animal. But everything I’ve read says that once you get in it and fly it, it’s going to spoil you for every other airplane,” he said.

Mr. Snyder’s restoration of the plane also marks the completion of the unfinished work of a fellow enthusiast, Robert Parham of Newport, the prior owner and a mechanical engineer for the Department of Defense at Marine Corps Air Station Cherry Point, who died April 13 at 65.

Mr. Snyder, who is originally from Ohio and served in the U.S. Army at Fort Bragg, moved to the area after landing work as a corporate pilot for an Atlantic Beach resident. He opened Tailwind Aviation about three years ago, and the firm provides maintenance services for the area.

Mr. Snyder hadn’t been here long when he stared hearing rumors about the mysterious Pitts biplane believed to be stored somewhere at or near MJS Field.

“My shop is kind of like the barber shop on the field – everybody comes here every morning and hangs out and drinks coffee,” Mr. Snyder said. “I heard stories about it. Nobody had seen it or looked at it, but folks said, ‘There’s a Pitts on the field somewhere.’ And someone who claimed to have seen it during a hangar inspection said it had a wrench that had been left behind and rusted on to one of the bolts on the engine.”

Another source said it had belonged to the late Mr. Parham, but the plane was no longer at MJS.

“Unfortunately, Robert died and he never got to restore it,” Mr. Snyder said. “I found out it had been moved to Spud Field – that’s where one of my contacts told me it was.”

Mr. Parham’s brother Richard lives in Texas and didn’t know what to do with the Pitts other than sell it, Mr. Snyder said.

“I was in the right place at the right time. You’ve got to jump on the opportunity to get something like that,” he said.

But the plane as found was incomplete. A number of fuselage pieces were missing. So, Mr. Snyder ordered the missing parts – about $4,500 worth – from Aviat Aircraft. A week later, the missing original parts were found tucked away in a corner of the hangar where the plane was stored and the new parts were sent back.

But much about the plane remained a mystery, including the names of the prior owners. Mr. Snyder said he’s still trying to trace its lineage.

He said the plane was used in aerobatics competitions and flown from 1977 until about 1991 and then parked, according to records, which have provided detailed information about its service history.

“Airplanes have logs, so it’s like having a history of the life of the airplane, which is kind of cool,” Mr. Snyder said.

He said the countless hours spent researching and restoring the plane is a way of honoring Mr. Parham.

“That’s what he wanted to do with it. I wanted to carry on what he started,” Mr. Snyder said.

The plan is to eventually make it a showpiece and “enjoy it like he would have,” Mr. Snyder said of the previous owner.

The process has included attention to “every little nut and bolt” that has been exposed to the salt air of the environment here, resulting in layers of corrosion and rust.

“I’ve been working on it every night for the past three or four months and have gotten to point where it’s almost show quality,” Mr. Snyder said.

The restoration also included an upgrade to modern avionics, provided via an Apple iPad, which can be mounted to the center of the plane’s new instrument panel.

Also, as a Harley-Davidson enthusiast, Mr. Snyder gave the plane’s engine a flat black powder coat treatment set off with chrome parts, similar to the motorcycle look. But it’s the bright red exterior of the plane – an update of the original color – and the barber pole-inspired cone over the two-blade propeller hub that provide a visual impact that will likely be more noticeable to most people.

A project of this scale requires assistance, and the work has provided valuable experience for a few area students from Craven Community College’s Institute of Aeronautical Technology in Havelock who have volunteered their time.

The program provides basic aircraft knowledge necessary for a career in aviation systems technology. Mr. Snyder said a handful of students from the school worked on the restoration, including Pat Kirk, who spent a considerable amount of time with him on the project.

The work touched on the “intricacies of stuff they don’t usually get to learn in school,” Mr. Snyder said, adding that four of the volunteers have recently landed jobs in aviation maintenance.

“In school, you learn the big stuff, but in a working shop you learn about the fluids, the sealants, the wiring – a lot of intricacies. That probably helped them get a better understanding of general maintenance, and it’s nice to have a project for the guys who want that extra knowledge,” he said. “It’s a nice notch on the belt, being able to help them get advanced jobs where usually they would have to start out at the bottom rung. It’s nice being able to help the self-starters from the school.”

Mr. Snyder said he wasn’t certain when he will make his first flight in the Pitts, but he recently cranked the engine for the first time.

“You have to have special training to fly it. I’m planning to go to Virginia to get training, so it’ll be some time after that,” he said.

Its good that this plane has been restored, by which the value of this plane is been increased : hotel safes

Interesting good luck. Will you take folks for a ride?