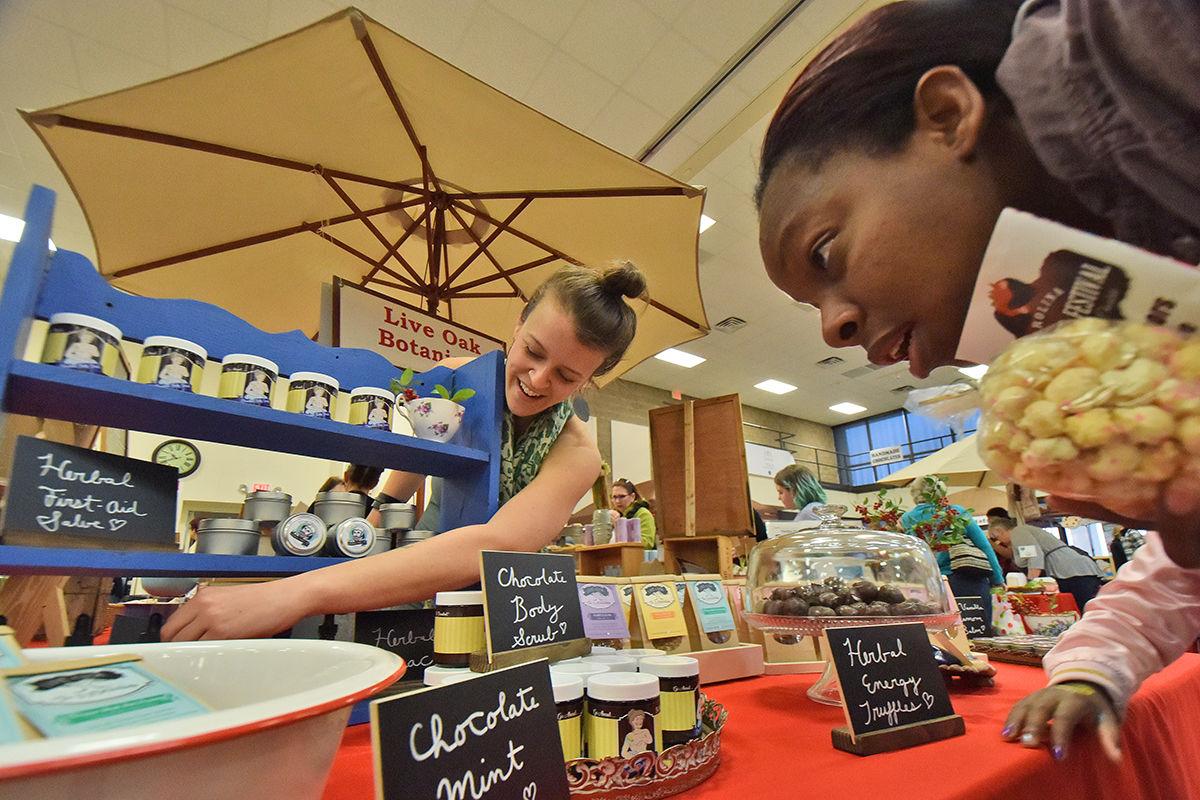 Kate McNally, left, owner and operator of Live Oak Botanicals based on Ocracoke, fetches a product for customer Kashina Glover, right, of Havelock during the 2020 Carolina Chocolate Festival at the Crystal Coast Civic Center in Morehead City. (Dylan Ray photo) 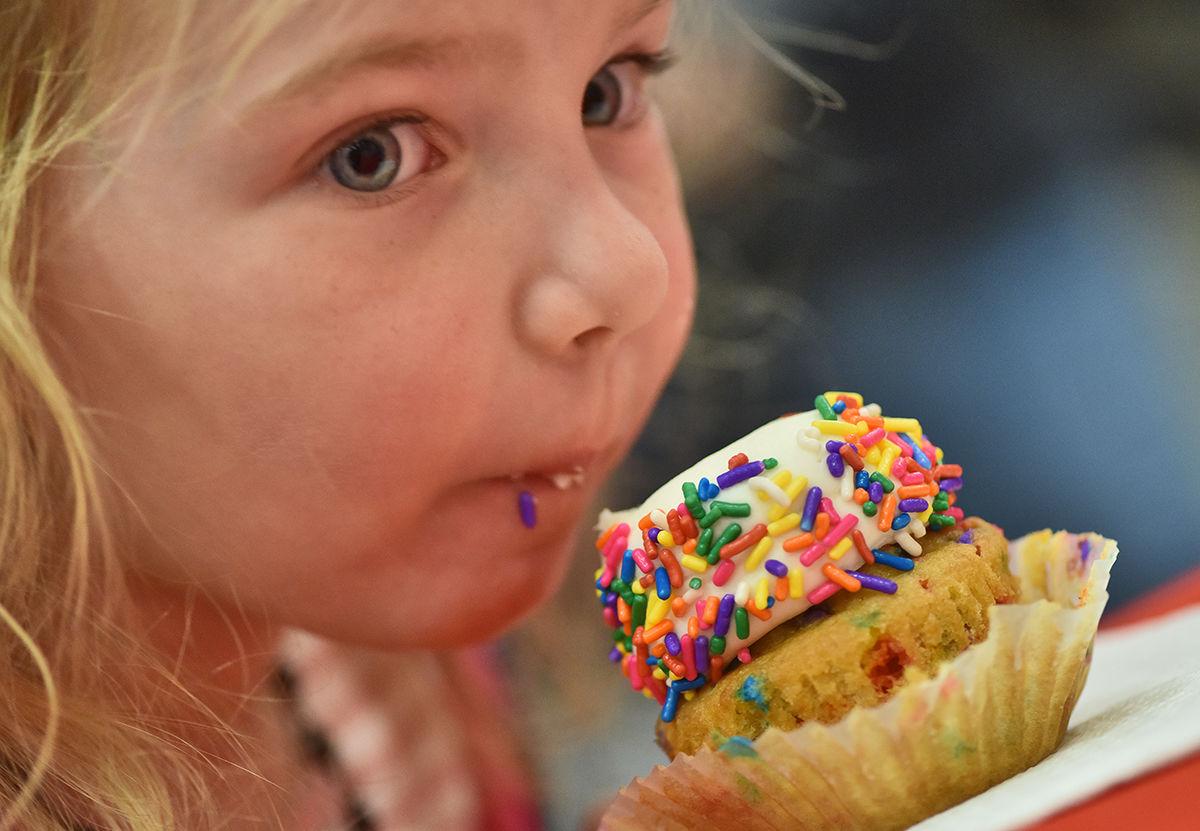 Savannah Garner of Cape Carteret dives into a candy-sprinkled cupcake Saturday from Frosted Bakery in Swansboro during the Carolina Chocolate Festival at the Crystal Coast Civic Center in Morehead City. (Dylan Ray photo) 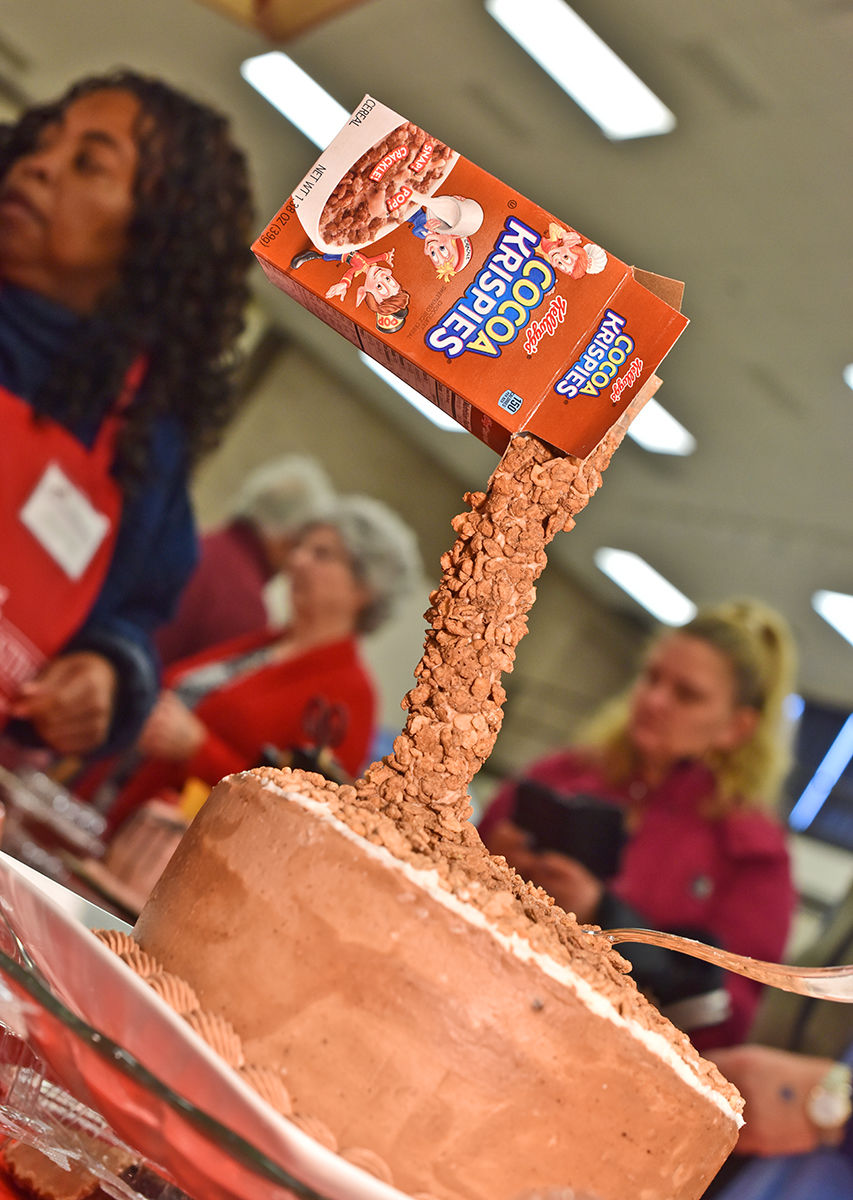 A decorative cake is ready to be auctioned to the crowd Saturday at the 2020 Carolina Chocolate Festival in Morehead City. (Dylan Ray photo) 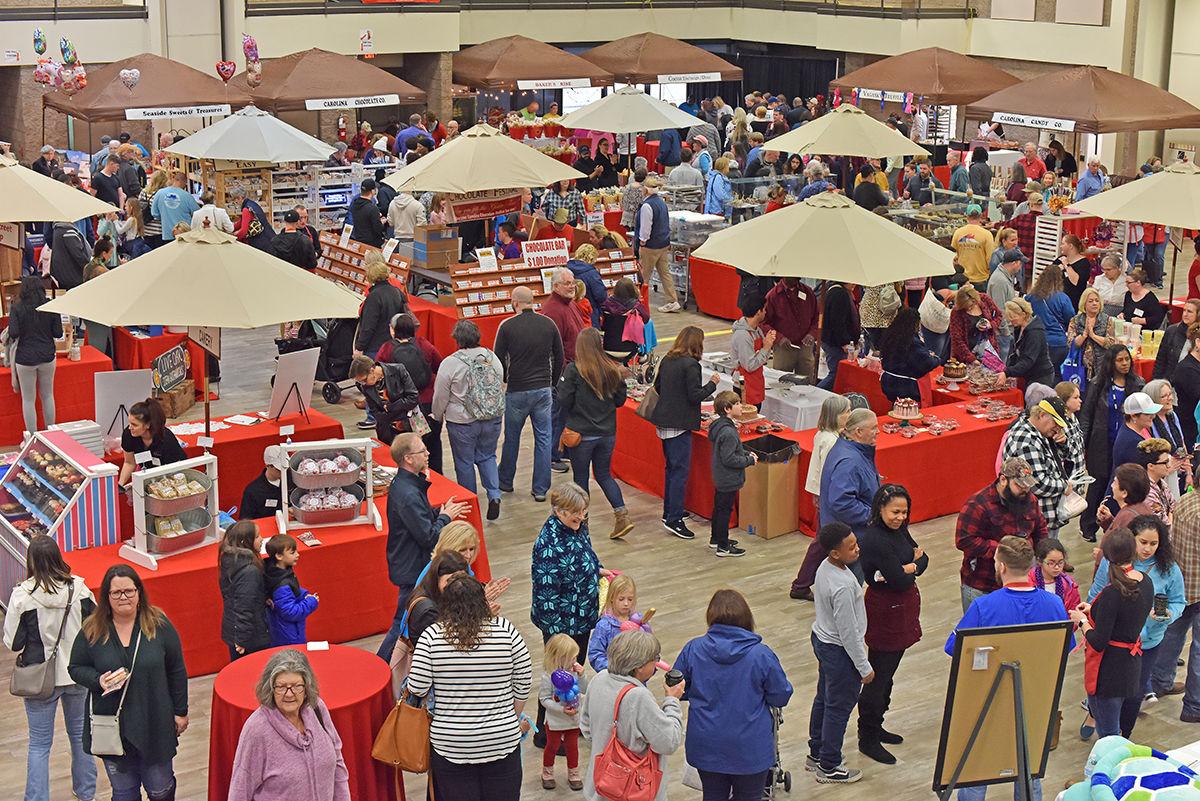 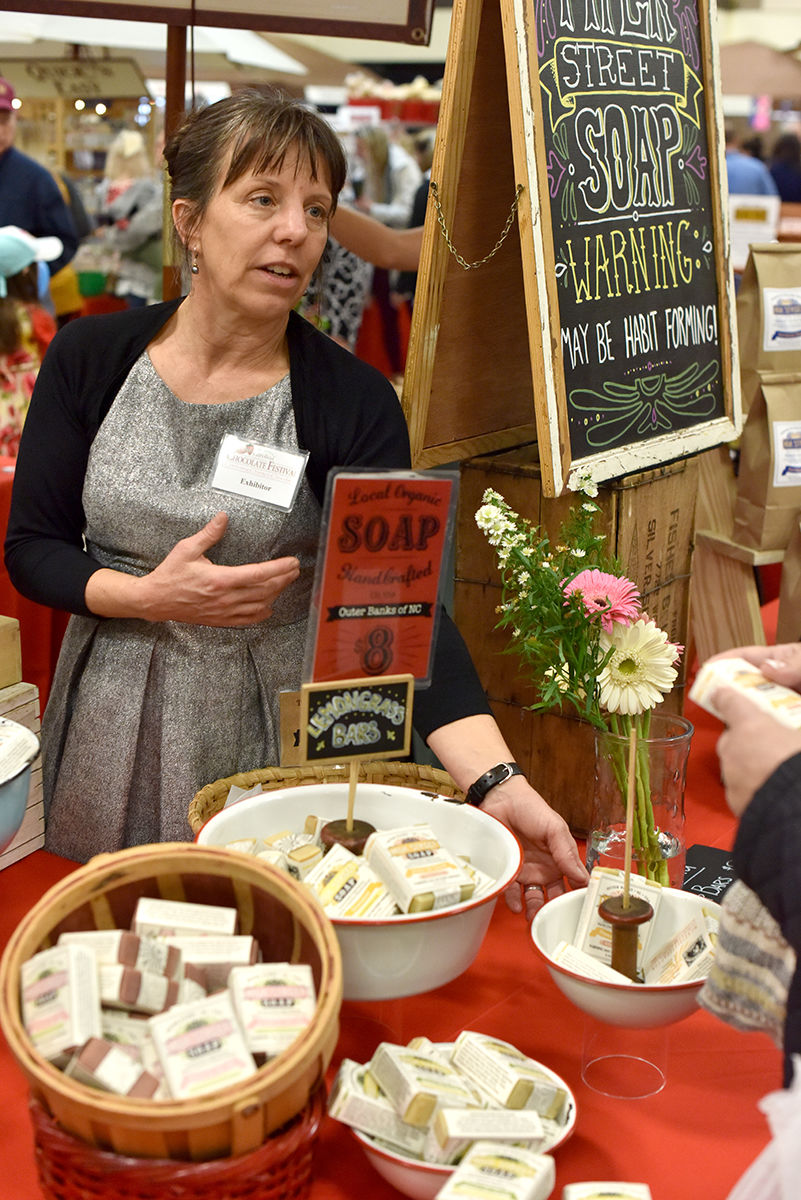 Kate McNally, left, owner and operator of Live Oak Botanicals based on Ocracoke, fetches a product for customer Kashina Glover, right, of Havelock during the 2020 Carolina Chocolate Festival at the Crystal Coast Civic Center in Morehead City. (Dylan Ray photo)

Savannah Garner of Cape Carteret dives into a candy-sprinkled cupcake Saturday from Frosted Bakery in Swansboro during the Carolina Chocolate Festival at the Crystal Coast Civic Center in Morehead City. (Dylan Ray photo)

A decorative cake is ready to be auctioned to the crowd Saturday at the 2020 Carolina Chocolate Festival in Morehead City. (Dylan Ray photo)

MOREHEAD CITY — Decadent sweet treats were around every corner, samples were set on the tables and chocolate intrigued the tastebuds of participants of this year’s Carolina Chocolate Festival.

The Crystal Coast Civic Center rivaled the famous Willy Wonka Chocolate Factory Saturday as vendors from near and far piled into the showroom to share their goods.

Among the vendors was Sue Baptiste with Seaside Sweets & Treasures.

Ms. Baptiste set up shop in her Newport home and said she has been creating chocolate for many years, including the wide variety she brought with her to the festival.

The treats ranged from coconut, to dark chocolate and milk chocolates, raspberry jelly-filled chocolates, peanut butter cups, mint cream and more. She even carried sugar-free options sweetened with maltitol, which is often used as a sugar substitute.

Ms. Baptiste said many of the flavors are homemade.

“I have secret recipes for all of them,” she said. “I’ve taken the recipe and modified it and experimented with it until I found something I liked.”

Ms. Baptiste has been making chocolate for 25 years and has participated in the Carolina Chocolate Festival for four.

“It’s for a good, charitable cause, and I love to be with the public,” she said. “It’s a great event.”

Each year the Carolina Chocolate Festival raises money for charities by hosting a weekend full of chocolate-themed events.

The festival includes fun activities for all ages, such as a Pro/Am Baking Contest, a 5K race, pudding eating contests, raffles, face painting, a chocolate spa and more.

Second Blessings Director Bob Lowery has been involved with the Carolina Chocolate Festival for years. He said the Saturday crowd gets bigger as the day goes on and everyone loves to see the vendors participating to help charities, much like his own organization.

Another vendor set up was That’s Good Chocolate from Rolesville.

Chocolatier Mary Rountree said the name for the company started out as a joke.

“When people taste it, they say, ‘Oh, that’s good chocolate,’ so that’s why we named it that,” she said.

Her chocolate treats varied from the traditional milk and dark chocolate varieties to vegan and gluten-free options, such as the vegan cranberry coconut bark and the gluten-free flourless chocolate truffle.

Ms. Rountree, a retired registered nurse, said there were many reasons she decided to include the vegan and gluten-free options.

“I have a daughter who is a vegan and doesn’t like gluten,” she said. “I also realized there are people who have health issues.”

She said she enjoys participating in events like the Carolina Chocolate Festival to see how people react to her creations.

“I like to see people’s faces when they taste it,” she said.

As well as being able to nibble on samples, festival attendees were able to see chocolate used in unconventional ways with products from Milk Street Soap and Live Oak Tea and Botanicals, two businesses from Ocracoke.

Kim Meacham with Milk Tree Soap uses chocolate in many of her products.

“Chocolate is a slight exfoliant,” Ms. Meacham said. “It’s great for your skin in small amounts.”

“I even have herbal energy truffles dipped in chocolate for the occasion,” she said.

Many who attended the festival said they enjoyed the vendors.

Kashina Glover and her daughter came for the first time to experience all there was to offer and tasted many of the treats.

“I tried the chocolate-covered bacon and it wasn’t that bad,” she said.

Blake and Hailey Jensen of Havelock and their two small children, Ollie, 2, and Finn, 9 months, also came to the festival.

“We were driving down the road and we saw the signs and thought we would check it out,” Mr. Jensen said.

Ms. Jensen said they are a food family and love chocolate.

She was looking for chocolate- or caramel-covered pecans or other nuts, while Mr. Jensen said he was just happy to be at the festival.

Tickets for the festival are $9 for adults and $2 for children between the ages of 5 and 12. Those under the age of 5 are admitted for free. Active duty military personnel with a valid ID will receive free admission.