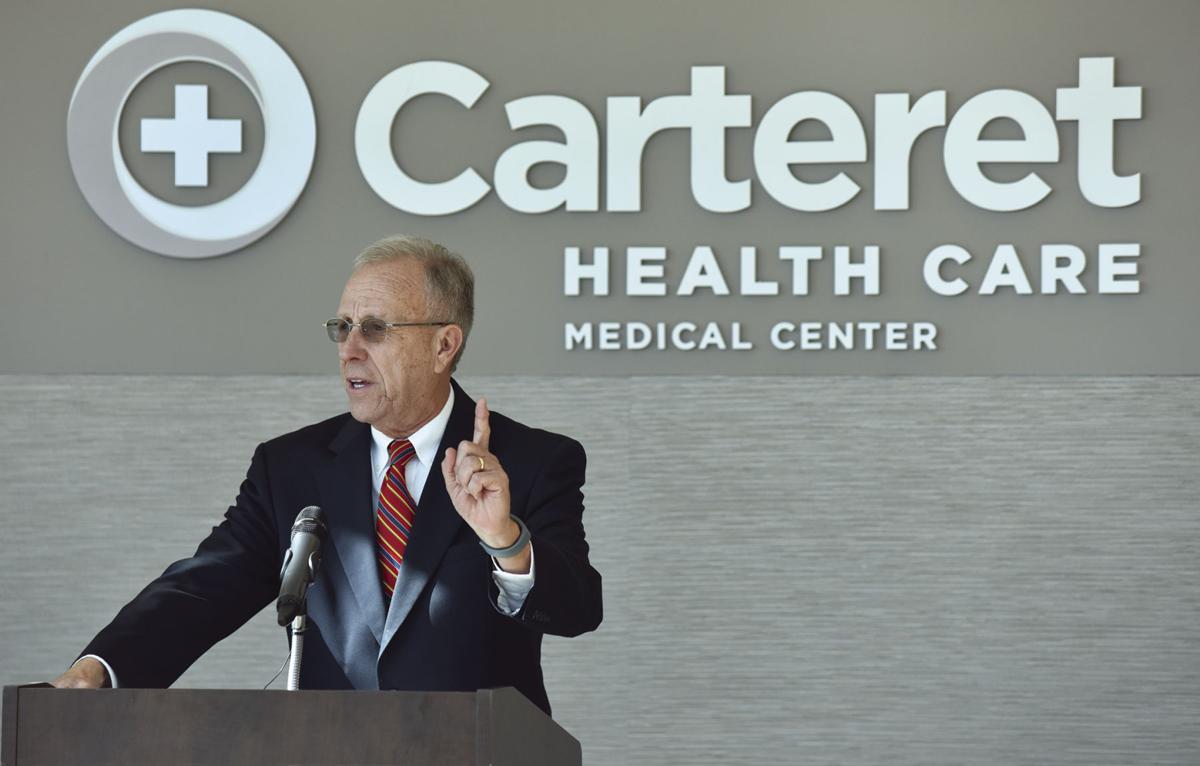 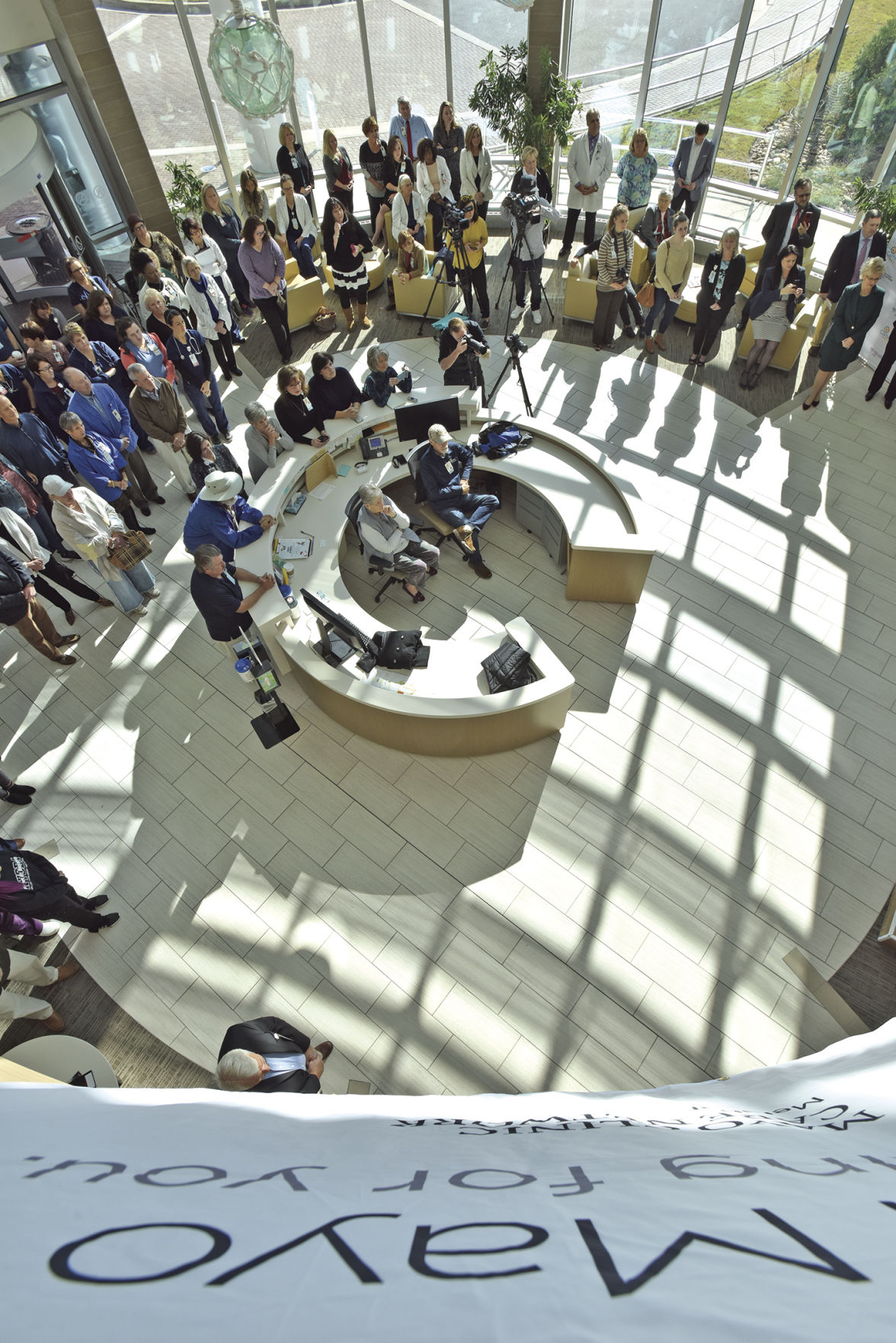 A crowd gathers in the Carteret Health Care atrium Thursday to learn about a partnership with the Mayo Clinic Care Network. (Dylan Ray photo) 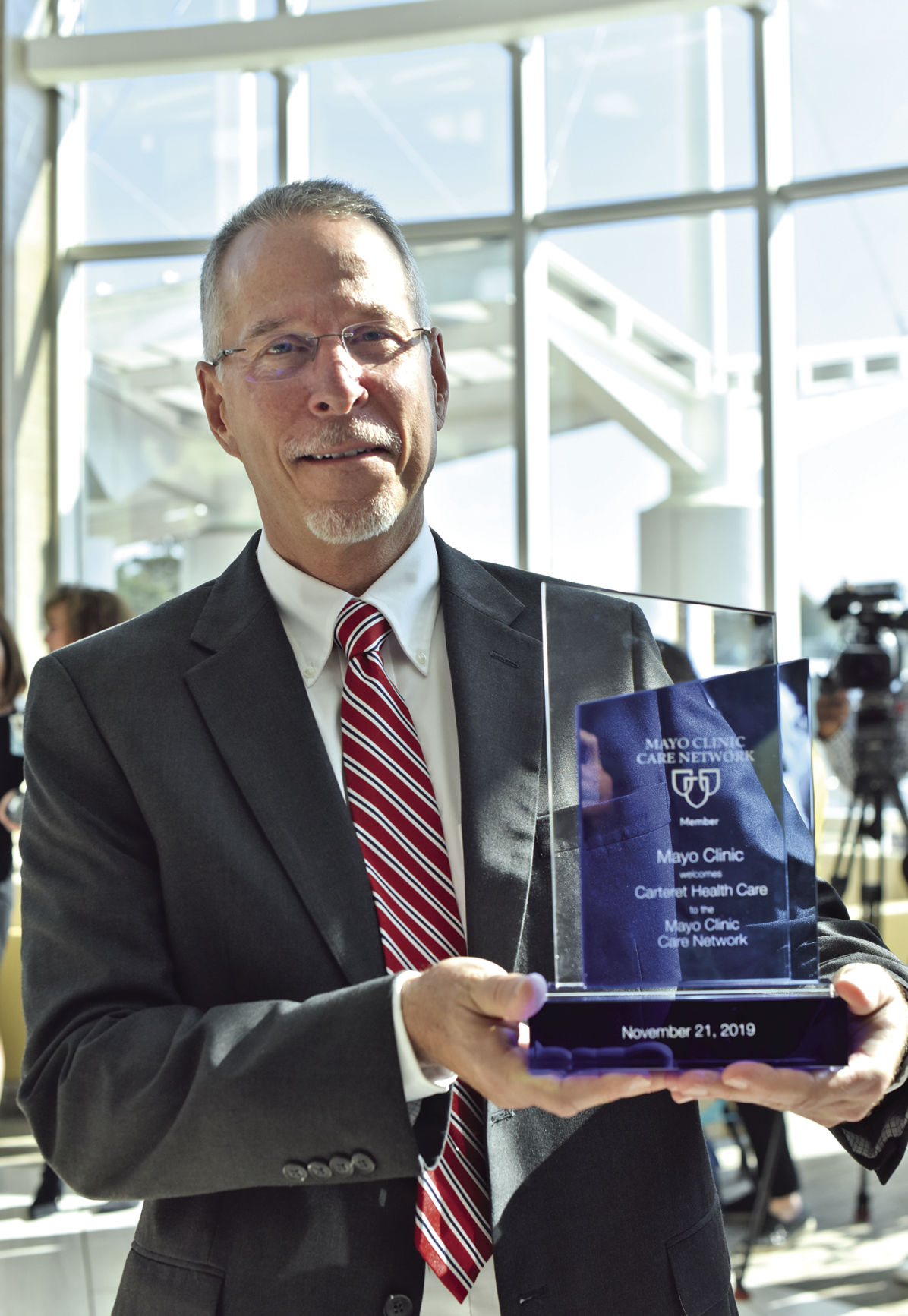 A crowd gathers in the Carteret Health Care atrium Thursday to learn about a partnership with the Mayo Clinic Care Network. (Dylan Ray photo)

Hospital officials, community leaders, patients and others packed the hospital atrium Thursday morning to learn more about the new collaboration. CHC President Dick Brvenik, who is set to retire in February, said the partnership is 14 months in the making.

“This relationship that we’re entering into is going to be a game changer, it truly is,” he said. “…This is about a great collaboration of great medical minds and an investment that this hospital is making.”

Mr. Brvenik noted the Mayo Clinic, which has campuses in Minnesota, Arizona and Florida, is ranked No. 1 by the U.S. News & World Report and is highly regarded internationally, as well. The Mayo Clinic Care Network was established in 2011 as a way for the hospital to partner with like-minded independent health systems across the globe to share resources and medical expertise. There are currently about 40 member facilities worldwide.

The network allows participating hospitals to share resources and medical expertise using a number of tools, most notably online consultations with Mayo Clinic physicians and other experts in the network. Through the eConsults, as they’re called, CHC staff can get second opinions or review complex cases and get diagnostic and treatment advice from Mayo Clinic physicians. Other tools include access to the online medical reference AskMayoExpert, live video conferences, educational materials and Mayo Clinic’s latest research.

CHC was selected to participate in the network after a rigorous vetting process, according to Dr. Jeff Moore, who is secretary of the CHC Board of Directors and helped lead the effort to join the network. He said CHC and the Mayo Clinic share similar values and that was part of the reason the local hospital joined the network.

“As a member of the board and of the medical staff, I’m keenly aware of what the mission of our hospital and our medical community is, and that is to provide the highest quality care we can to the people whom we serve,” Dr. Moore said. “It was about 14 months ago that Dick Brvenik came up with the vision that perhaps our mission parallels the Mayo Clinic’s mission, which is a very patient-centric attitude toward providing medical care. The more we looked into it, the more it became apparent that our missions and our desires and goals were parallel.”

Dr. Moore said one major benefit of the partnership is it allows some patients to be treated locally instead of having to travel outside the county to get a diagnosis or medical care. In addition, it gives patients access to specialists who they may not otherwise be able to see.

CHC Community Relations Marketing Director Michelle Lee said the new partnership comes at no extra cost to patients. She also said it does not represent a merger or an acquisition and the hospital plans to remain an independent facility for the foreseeable future.

Ms. Lee said the partnership with the Mayo Clinic took effect immediately, and even before the official announcement Thursday, physicians had already taken advantage of some of the network’s resources on a couple cases.

“We’ve already had a couple of our physicians, Dr. (Luis) Cuervo and Dr. (Vicki) Morris, who have participated in the eConsults,” she said. “So they have both already seen the benefits for their patients.”

Dr. Ryan Uitti, medical director for the Mayo Clinic Care Network, said sharing knowledge and expertise helps patient outcomes, which is why the facility collaborates with hospitals like CHC. He said web-based technology is particularly valuable for connecting people across the world and expanding overall medical knowledge.

“We’ve gotten enough people in the network that we’re learning from each of them and they can learn from the collective,” Dr. Uitti said. “…It is, as Mr. Brvenik said, I think it is a game changer, for making use of capabilities that weren’t available to hospitals years ago.”

More information is at CarteretHealth.org.

And the cost for all this groundbreaking, earth shattering innovation is $——————.00 ?

Onslow does have better cost benefit.

Not saying I do not like it. Just nothing comes without a price! Onslow, well it is ok but ............. if I had my rather Carven has proven to be the most reliable. Of course that changes with time and what ever. Relative prosperity seems to attract the better practitioners but the support staff tends to vary. Nothing is perfect in the world of “ the practice of medicine” . Practice is not perfect by definition. Way too many variables. Just doing the best they can with what they have. Sooooooo, pick your poison.

Getting a second opinion from Mayo is great. Since the practice at Carteret is dismal, anything is better. However, to maintain its high standards and its reputation, Mayo should rethink this.

This action will definitely not improve the reputation of Mayo but might improve Carteret general's a little,

Wonder what the patient cost will be for any collaboration with the folks at the clinic ? Anyone hear anything about that topic? I know from personal experience that they do outsource radiation oncology expertise from Chapel Hill. That is not a cheap date, for sure, so why not from the Clinic? This outsourcing, doc on a screen sort of thing, can save hospitals money as well as increase productivity. Assuming they have the qualified staffing to back it up. That can be the rub in a lot of cases.