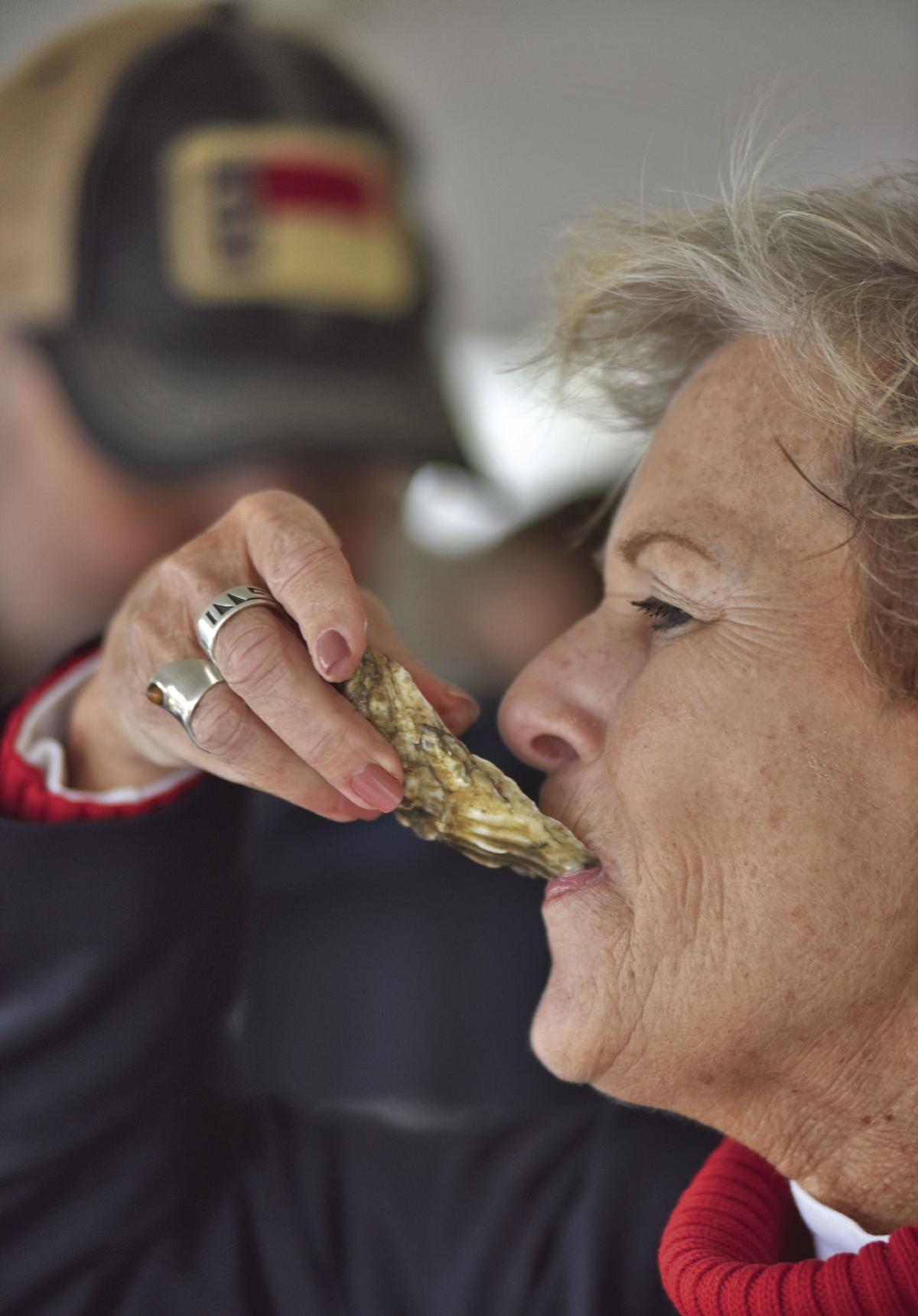 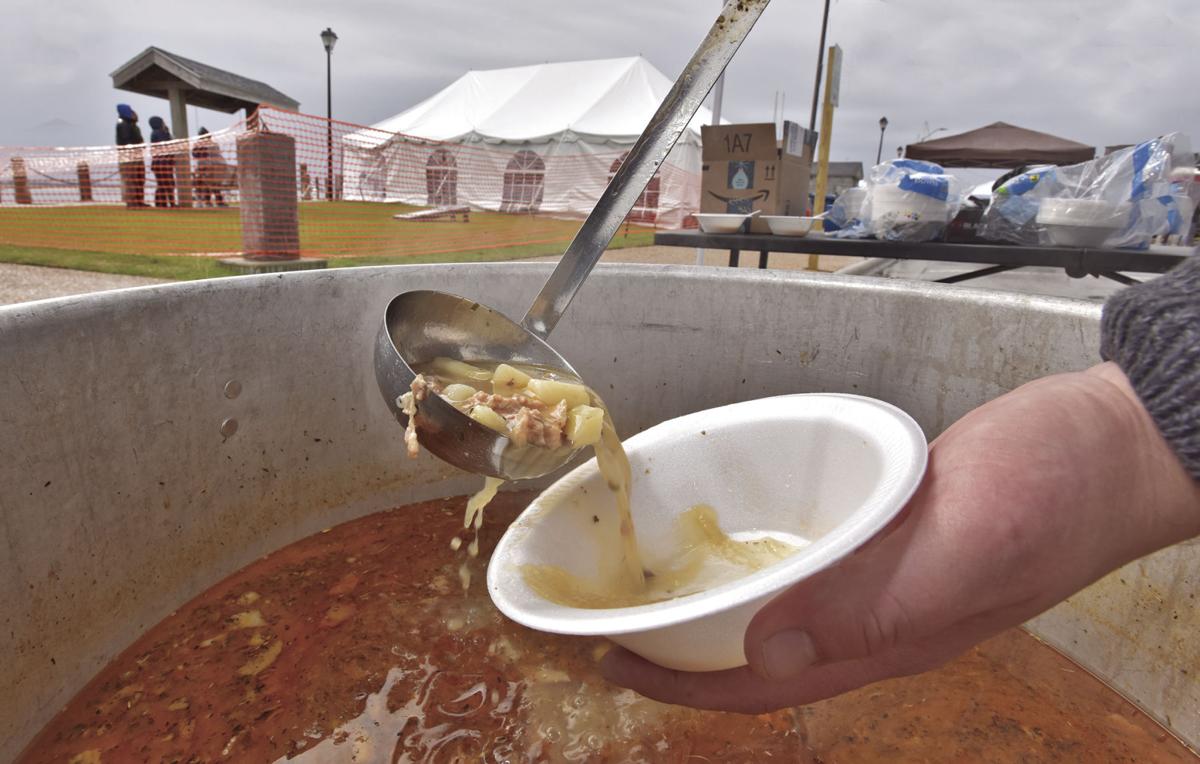 Michael Griffin with High on the Hog on-site catering in Beaufort dips out a chunky ladle of Down East clam chowder Saturday during the fourth annual Crystal Coast Oyster Festival on the Morehead City waterfront. (Dylan Ray photo)

Michael Griffin with High on the Hog on-site catering in Beaufort dips out a chunky ladle of Down East clam chowder Saturday during the fourth annual Crystal Coast Oyster Festival on the Morehead City waterfront. (Dylan Ray photo)

Festival organizer Russell Lewis expected a good turnout despite the rain, he said.

“You can’t control it, but it’s oyster weather,” Russell said. “The VIP bar is sold out, and there are some of the best oysters in North Carolina under that tent right now.”

There were seven different farmers, all based out of Carteret County, shucking oysters for participants to try.

Farmers from My Lord Honey Seafood Co., based out of Beaufort, were on site preparing their oysters.

Perry Bayer and Christian Bayer, a father and son duo, have multiple farms spread throughout the county – mainly in Newport River, Nelson Bay and North River.

For the festival, they brought oysters from North River.

Perry said oyster crops have been plentiful since Hurricane Florence struck in September 2018, but the storm itself was devastating to the farmers.

The storm almost sent the farm into bankruptcy.

“It destroyed us,” Perry said, adding that they lost 90% of their operation.

“It was devastating,” he said.

Hurricane Florence was a learning process. This year the duo spent time learning what equipment would hold up better in a storm.

“Bottom cages tend to be best for surviving a hurricane,” Perry said. “They don’t get beat up as much as floating cages.”

Perry said Newport River has rebounded since the storm, and oysters and clams have been plentiful in reproducing.

“So far this year is an overwhelming crop, (and) the future looks good,” he said. “We’ve been blessed.”

Perry said there are plenty of ways to eat oysters, but his favorite is steamed over pecan wood for added flavor.

“We grew up before Hardees and all that, so this is what you ate,” he said.

Perry was not the only one who enjoyed the oysters.

Jim Lewis and his son Josh said they liked oysters, and they never miss a Crystal Coast Oyster Festival.

“We come every year,” Josh said. “We are big oyster fans. It’s an acquired taste, and if you like it, it’s good for you.”

They also brought along their own red wine vinaigrette for the oysters.

Jim said he liked attending the festival because he was able to sample oysters from different farms.

“We get to taste a lot of oysters side by side,” he said. “It really makes a difference.” Each oyster had its own distinct flavor, he said.

Sampling the oysters was just a part of the reason to attend.

“The whole point of this festival is to raise awareness of local oysters,” Russell said.

A portion of the proceeds from the festival went to the N.C. Shellfish Growers Association. The organization is working on creating a grant to help farmers recover from storm damage that insurance didn’t cover.

According to the farmers in attendance, insurance is not up to par across the industry.

Roy Emerson lives in Greenville but farms out of North River. He said oyster farming is modeled after land farming, but there are some differences.

According to Mr. Emerson, when farmland is damaged, the problems are noticeable. It’s not the same for oyster farming.

“Our stuff is underwater, so it could be two weeks before you know what’s wrong.”

This makes it more difficult for oyster farmers to collect insurance for damages.

In addition to sampling raw oysters in the VIP tent, those who attended the festival were also able to enjoy live music from Scott Arnold and Chairmen of the Board, partake in fried and steamed oysters from various food trucks and shop at arts and crafts vendor booths.

Dianne Styron set up products from her shop, Dianne’s Delightful Designs based in Newport.

She was selling oyster-themed jewelry, decorative items made from recycled tires and other creative knick-knacks.

Her daughter Cyndi Smith helped her set up the crafts and said she enjoys attending the oyster festival.

“She (Dianne) does really well every year,” Ms. Smith said. “I like the music. I’m looking forward to Chairmen of the Board.”