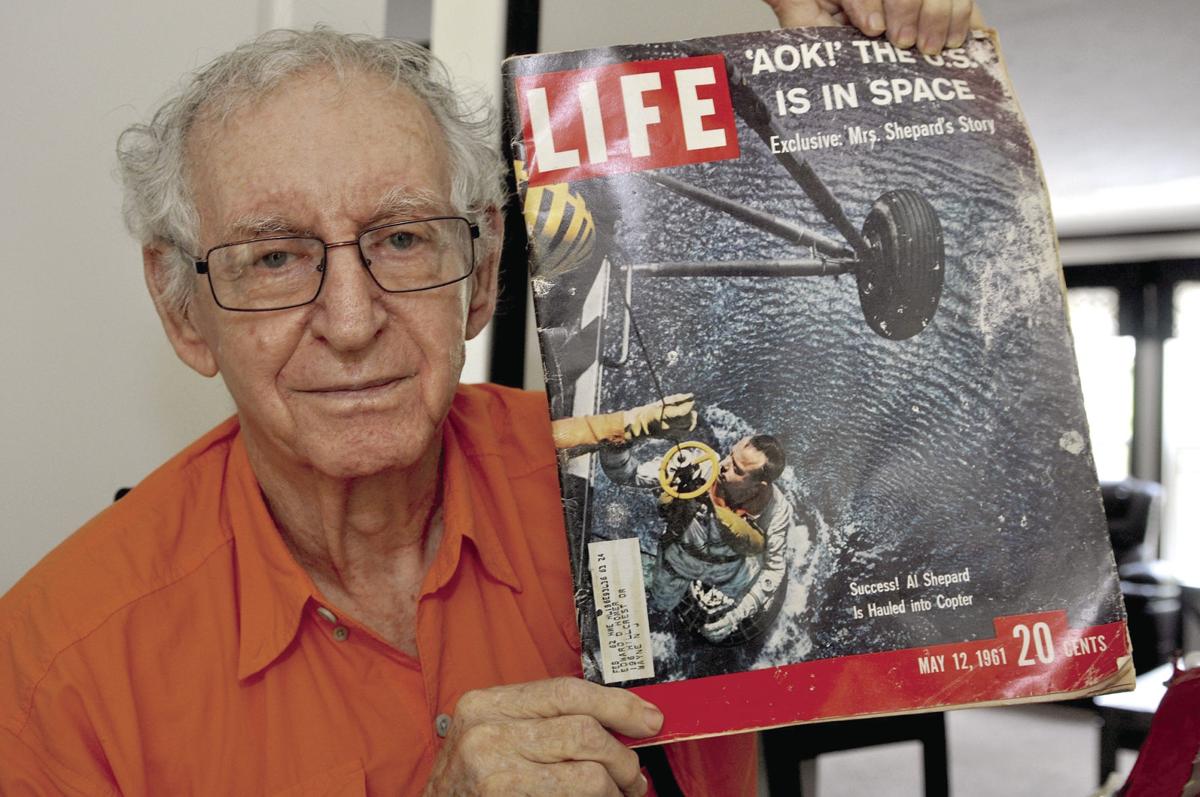 Retired U.S. Marine Corps Maj. George Cox of Newport holds a May 12, 1961, copy of Life Magazine, featuring the back of his helmet and hands on the front cover as he pulls Project Mercury astronaut Alan Shepard Jr. from his capsule that had just returned from space. (Cheryl Burke photo) 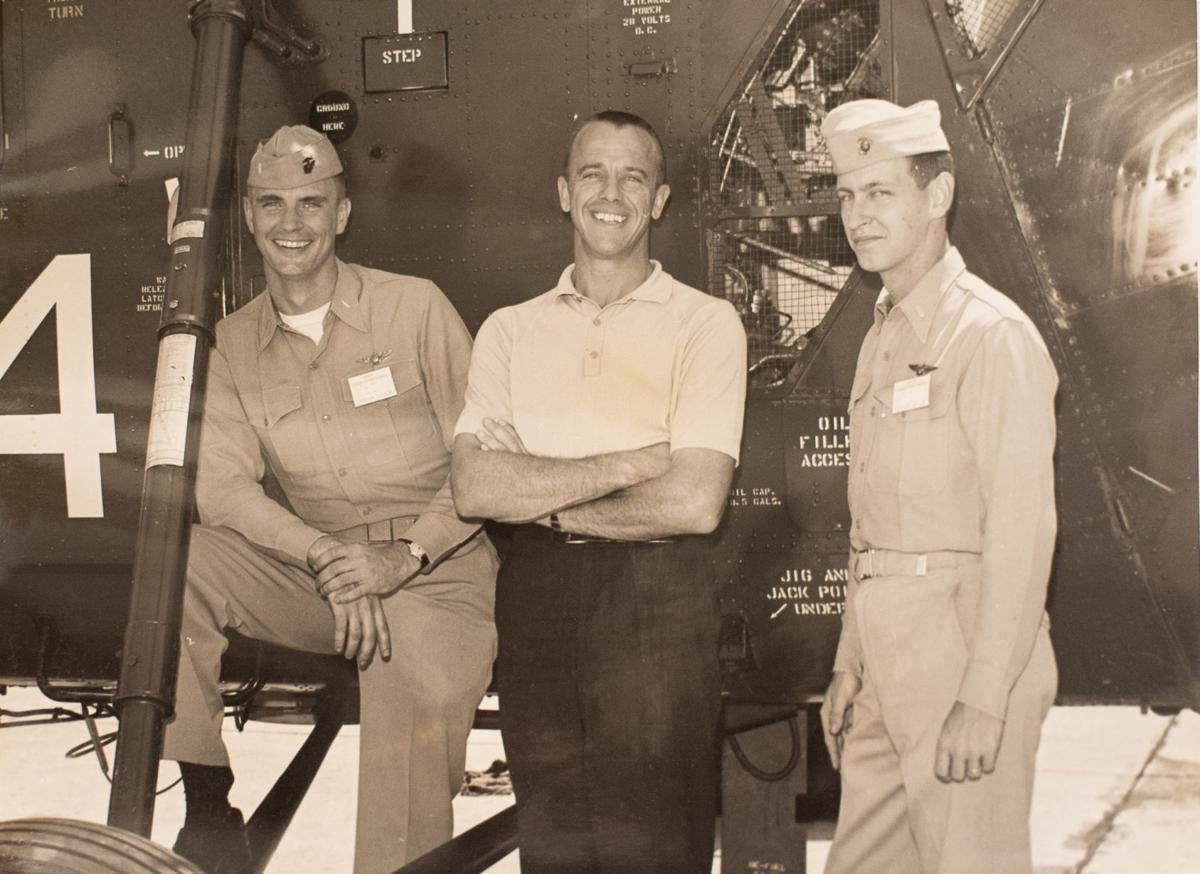 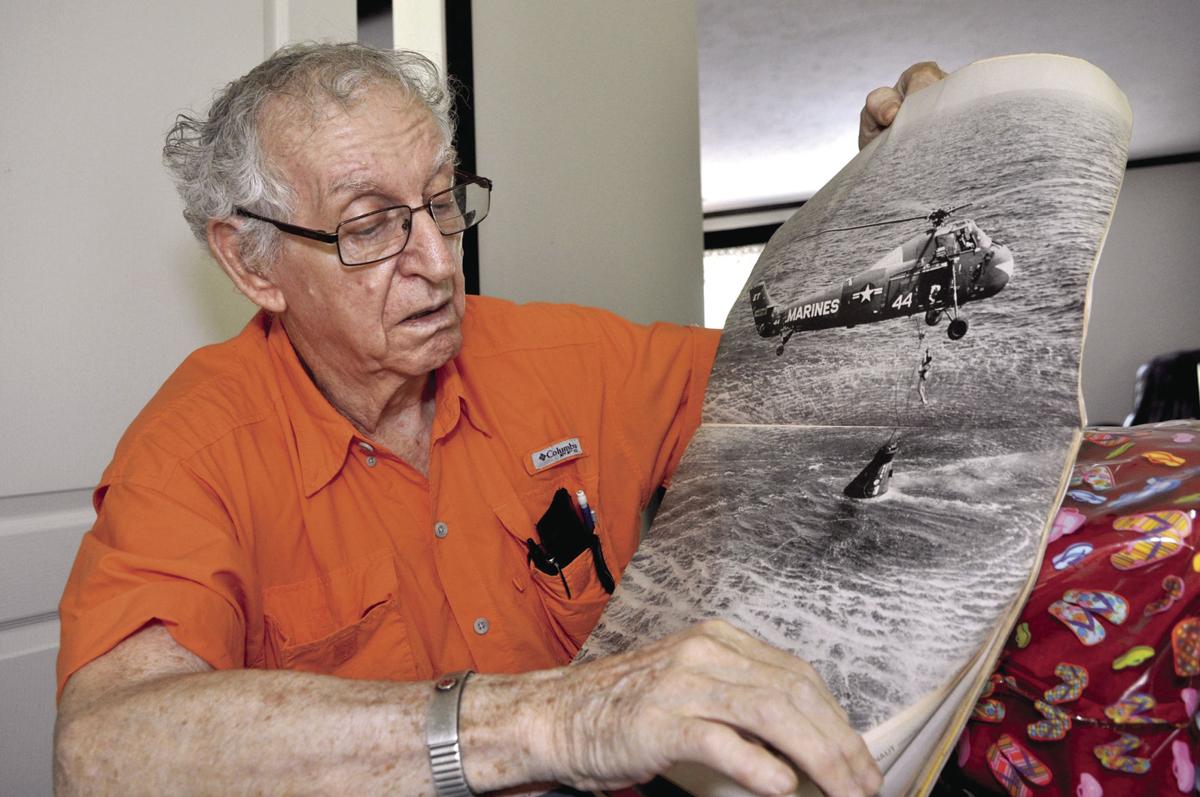 Retired U.S. Marine Corps Maj. George Cox of Newport looks at a photo featured in a publication in 1961 that shows him leaning out of a helicopter retrieving Project Mercury astronaut Alan Shepard Jr. from the Atlantic Ocean after his space craft returned from space. (Cheryl Burke photo) 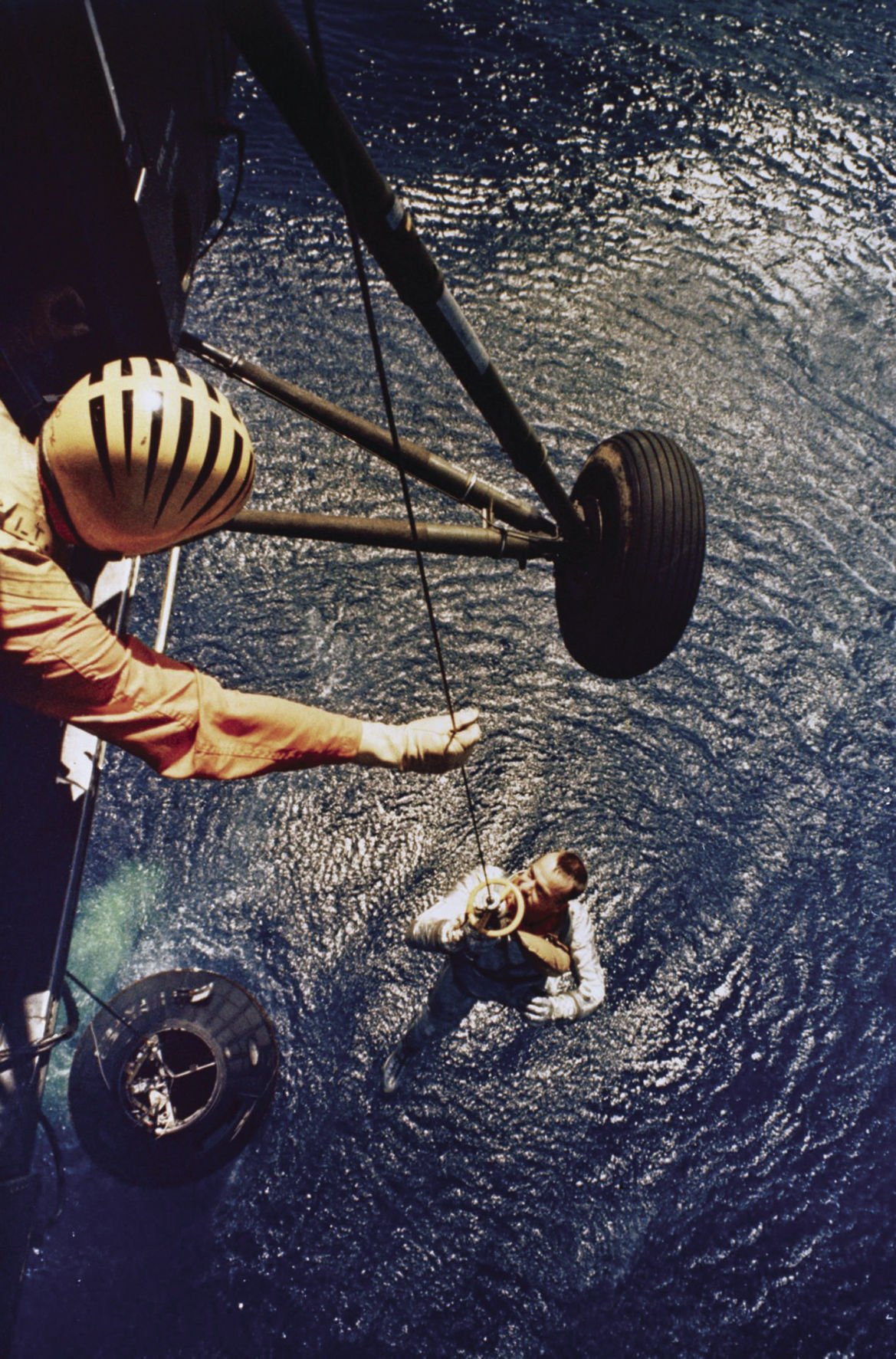 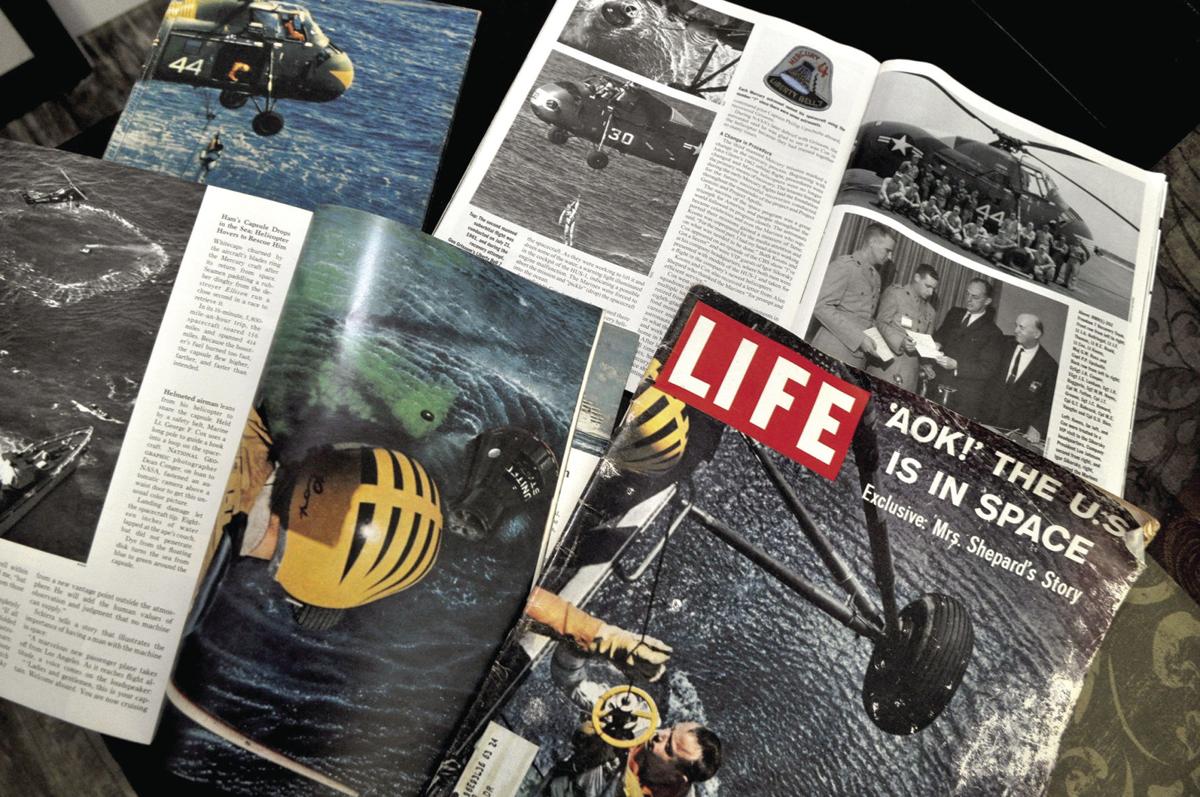 These are some of the many publications that feature photos of retired U.S. Marine Corps Major George Cox as he recovered Project Mercury astronaut Alan Shepard Jr. from his space capsule in May 1961. (Contributed photo)

Retired U.S. Marine Corps Maj. George Cox of Newport holds a May 12, 1961, copy of Life Magazine, featuring the back of his helmet and hands on the front cover as he pulls Project Mercury astronaut Alan Shepard Jr. from his capsule that had just returned from space. (Cheryl Burke photo)

Retired U.S. Marine Corps Maj. George Cox of Newport looks at a photo featured in a publication in 1961 that shows him leaning out of a helicopter retrieving Project Mercury astronaut Alan Shepard Jr. from the Atlantic Ocean after his space craft returned from space. (Cheryl Burke photo)

These are some of the many publications that feature photos of retired U.S. Marine Corps Major George Cox as he recovered Project Mercury astronaut Alan Shepard Jr. from his space capsule in May 1961. (Contributed photo)

NEWPORT — With Saturday the 50th anniversary of man’s first steps on the moon, one town resident remembers playing a part in America’s space race.

“I was in the middle of the space race, but I was a little cog in a very big machine,” he said Wednesday.

Project Mercury, initiated in 1958 and completed in 1963, was the nation’s first man-in-space program. Its goals were orbiting a manned spacecraft around the Earth, investigating man’s ability to function in space and safely recovering man and spacecraft, according to NASA’s website.

Mercury was a major stepping stone toward getting an American to the moon, which was accomplished July 20, 1969, when Apollo 11 astronauts Neil Armstrong, Michael Collins and Buzz Aldrin landed on the lunar surface.

Thanks to Mr. Cox, both Mr. Shepard, in May 1961, and Mr. Grissom, in July 1961, were safely recovered once their capsules returned from space, ending up in the Atlantic Ocean.

Mr. Cox’s photo was featured on the front cover of Life Magazine as he hoisted Mr. Shepard up from his capsule into the helicopter. In addition, he was featured in publications such as National Geographic and even made a guest appearance on an old national game show, “I’ve Got a Secret.”

Mr. Cox, also a retired math teacher from Beaufort Middle School, doesn’t talk much about the space race these days. He was among hundreds of county residents displaced by floodwaters during Hurricane Florence.

His home on Orange Street, as well as his daughter’s house next door, were destroyed when several feet of water came in during the Category 1 storm that devastated the county Sept. 13-14.

In fact, he was on the receiving end of being rescued when the U.S. Coast Guard saved Mr. Cox and his family from their houses as floodwaters got too high. They were transported to the emergency hurricane shelter at Newport Middle School, where Mr. Cox said his family stayed for nearly three weeks.

He’s living with his wife in a travel trailer he purchased following the storm, and he’s still waiting for his house to receive extensive repairs. Unfortunately, Mr. Cox said he had let his flood insurance lapse, so he took out a $180,000 loan to make the needed repairs.

“I received $12,000 from FEMA (Federal Emergency Management Agency), but that wasn’t close to meeting the cost of the repairs,” he said. “I was nearly out of debt, now at 82 I’m back in debt.”

His daughter’s house had to be demolished, but she had flood insurance and has already received a modular unit, which she elevated in preparation for future flood events.

One thing Mr. Cox saved prior to the floodwaters getting too high was a bag containing all of his photos, articles and memorabilia from his days with Project Mercury. Included in his collection are photos autographed by Mercury astronauts, as well as correspondence with Mr. Shepard.

“I got to meet all seven astronauts (known as the Mercury Seven),” Mr. Cox said. “I got to go onboard ship with them.”

In addition to recovering Mr. Shepard and Mr. Grissom, he safely retrieved a monkey, Miss Sam, and a chimpanzee, Ham, during two flights conducted prior to using manned space crafts.

It seems Mr. Cox was destined to pick up astronauts because he wasn’t originally scheduled to recover Mr. Grissom during his flight in July 1961. Fate, however, stepped in.

“We were actually the backup crew in case something went wrong,” Mr. Cox said.

Something did go wrong when an emergency light came on in the helicopter assigned to pick up Mr. Grissom. That meant the backup crew, which included Mr. Cox, had to recover the astronaut.

Mr. Cox said the mission was filled with problems because Mr. Grissom opened the space capsule too early, which caused it to sink. Then as the astronaut waited in the water, his flight suit began filling with water because he left a port open.

“One of our guys said they also saw a shark swimming near him, but I didn’t see it,” Mr. Cox said.

Thankfully, Mr. Cox hoisted Mr. Grissom onto the helicopter in time. Tragically, Mr. Grissom, along with Ed White and Roger Chaffee, died Jan. 27, 1967, when a fire broke out during a launch rehearsal test aboard Apollo 1.

Mr. Cox, who served two tours in Vietnam following his work with Project Mercury, said he was sad when he heard the news about the fire.

“It made me feel very sad that he got killed,” he said. “He was an astronaut and an important part of the space program. But I also had a lot of friends who died during Vietnam, too.”

Mr. Cox got involved with the Mercury program because of his military service. He joined the U.S. Marine Reserves in 1955, eventually ending up a second lieutenant and assigned as an aviator with the HMR-262 helicopter squadron at Marine Corps Air Station New River in Jacksonville in January 1959. His squadron was assigned to assist with the recovery phase of Project Mercury in 1960.

After the Mercury mission ended in 1963, Mr. Cox did two tours of Vietnam and ended his 23-year military career in 1978 at Marine Corps Air Station Cherry Point.

After leaving the service, he earned degrees in business administration and education. He landed a job teaching math at BMS. After a 21-year career in teaching, he retired in 2001.

Although Mr. Cox doesn’t see his work with Project Mercury as a big deal, it was noticed earlier this year by the N.C. Department of Natural and Cultural Resources while the organization was creating a digital museum about the role of North Carolinians in the space program.

Jessica Bandel, digital editor with the historical research office at NCDNCR, said, “Our ultimate goal, through our commemorative efforts this year, is to bring greater awareness to the fact that the American space program required the support of hundreds of thousands of citizens from all corners of the country. Most North Carolinians do not yet know the role their fellow state citizens played in our nation’s victory in the space race, and we want to change that. The contributions made by Mr. Cox and his squadron during Project Mercury influenced spacecraft and crew recovery procedures all the way up through the Apollo program. His story is extraordinary.”

During his life, Mr. Cox and his wife Vicky had two children, Meredith and David, who both became school teachers.

His children said they include their father’s role in the space program in their classroom lessons.

“He came to my classroom a couple of times and talked to my kids,” his daughter, a math and science teacher at HJ McDonald Middle School in New Bern, said.

His son, an Advanced Placement history teacher at Northside High School in Jacksonville, also incorporates his father in his lessons on the U.S. space race.

“I am very proud of him,” his son said. “He flew in Vietnam, he was part of the space program and he lived. He is a hero.”

To see more about the role of Mr. Cox and other North Carolinians in the space program, go to mosaicnc.org/space-race/project-mercury. The section titled “Early Capsule Recovery” is primarily about Mr. Cox.

Me and my dad hunted deer with Mr. Cox and his son David at Cherry Point MCAS Rod And Gun club in the mid to late 70's, never knew he had done all of this neat stuff with the space program.

I am a former student and Mr. Cox was an extraordinary math teacher and I knew he retired from the Marines, but I had no idea he was part of the early space race. I would have loved to sit and talk with for hours, if I had know. Thank you for your service, Mr. Cox.