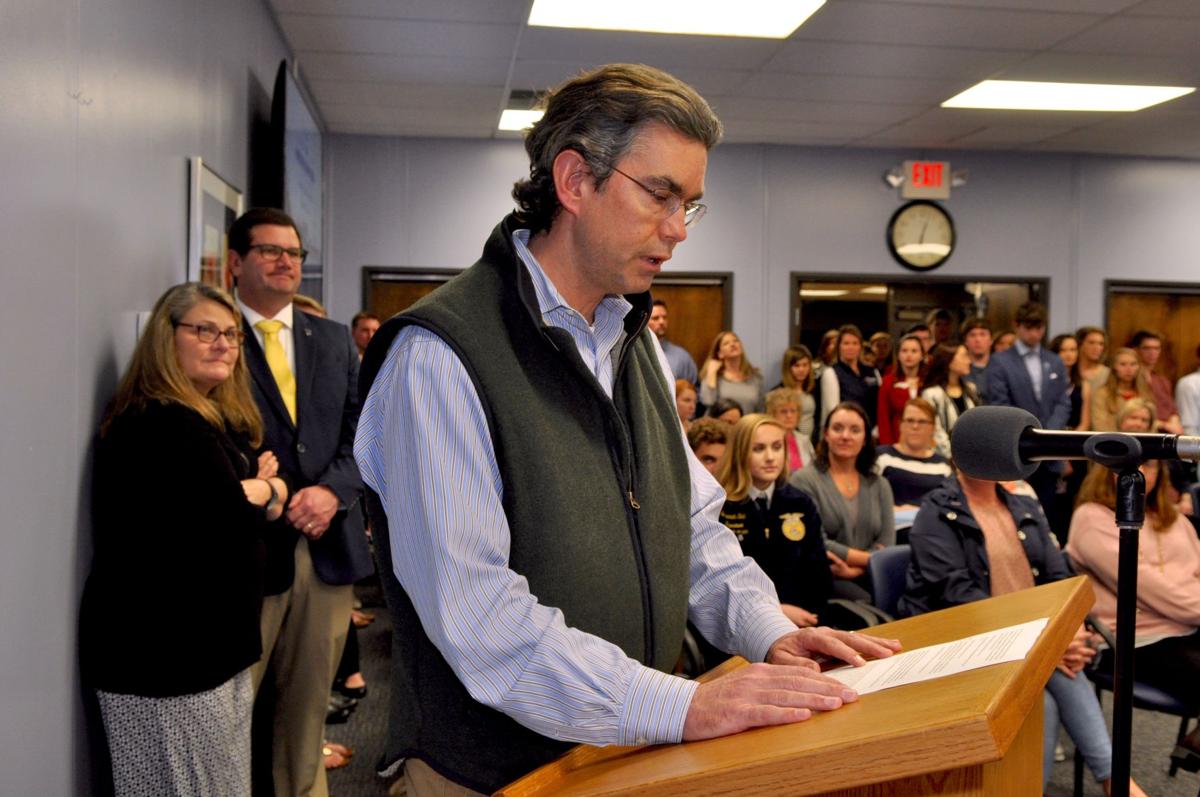 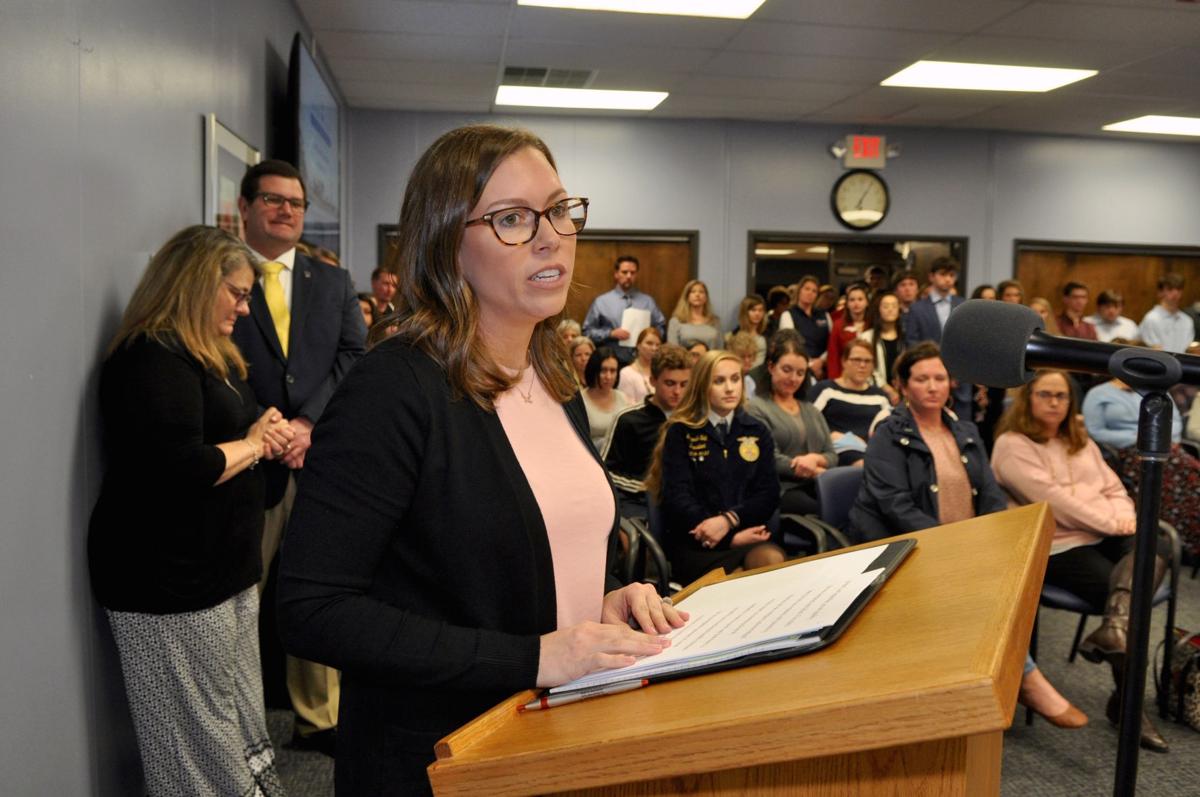 White Oak Elementary School parent Sarah Stipe Plaut asks the school board to provide funding in its 2020-21 budget for the school’s maintenance needs during a public comment time Tuesday in the school system’s central office in Beaufort. (Cheryl Burke photo)

White Oak Elementary School parent Sarah Stipe Plaut asks the school board to provide funding in its 2020-21 budget for the school’s maintenance needs during a public comment time Tuesday in the school system’s central office in Beaufort. (Cheryl Burke photo)

BEAUFORT — A handful of parents shared needs for their schools during a public comment time regarding the 2020-21 budget Tuesday in the County Board of Education meeting room.

With the Marine Science and Technologies Early College High School about to start registration for its third year, MaST parent Clark Johnson appealed to the board to fund the school in its 2020-21 budget.

Given there was a battle last summer over keeping the school open for the 2019-20 academic year, Mr. Johnson said it was time for the board to commit to consistently fund MaST.

“Please consider how you would feel if your children were attending MaST — all of the uncertainty and controversy that has swirled around the school,” Mr. Johnson said.  “Please make a commitment to these kids that they and their education are important. Make a commitment to them to stand by your word and allow them to finish what they bravely started. As their performance scores indicate, they are doing their part. Now, please do yours.”

He cited numerous statistics supporting the success of the school, including high test scores and a low per pupil expenditure rate.

MaST, located on the campus of Carteret Community College, offers students a chance to gain high school and college credits simultaneously. The school opened two years ago with 50 freshmen. This year there are 50 freshmen and 50 sophomores, with plans to accept 50 new freshmen for the 2020-21 academic year.

After a lengthy battle between MaST supporters and some board members last summer over funding the school for the 2019-20 school year, the decision was made in July to provide funds and continue the school.

“Because I care deeply about all of our county’s children, I implore you not to use our school’s needs as a scapegoat for closing MaST or for not funding the other needs our students have,” Ms. Plaut said. “There is enough money to fund that school and take care of our needs. If you use our problems to stop funding in other schools, we will not say thank you.”

As for White Oak’s needs, Ms. Plaut cited a need to remedy mold, mildew and moisture problems. She also said there were several restrooms out of order.

“This is not sustainable for the teachers, providing very little value to 1,000 students identified as AIG in our district,” Mr. Eggleston said, adding that he was speaking on behalf of AIG parents.

Mr. Eggleston said he was concerned about the future of the program because of the lack of sustainable local funding.

He asked that three members of the school board meet as an ad hoc committee with AIG parents over the next 30 days to develop a local funding plan for the 2020-21 AIG budget. He said the plan should be acted on publicly at a board meeting no later than April.

He further said that by May, he would like the board to report back during a public meeting “on a multi-year funding approach that by the 2021-22 budget will match, dollar-for-dollar, local funding with the state funding the AIG program receives in Carteret County.”

Following the board meeting, Interim Superintendent Richard Paylor said the comments would be taken into consideration during coming school budget discussions.

MaST as a 4th high school must be weighed against overcrowding and deteriorating conditions in our existing schools. How many schools can this County sustain ? While MaSt is a good idea the misconception is most of the students take core classes there like math and english. If strictly a specialized school for specific fields like Marine Science, mechanics or nursing then funding would be justified. Why should us taxpayers dedicate additional funding so a few kids can feel special ?

It seems like the Western side and Downeast schools have needs that address the majority of our student population.

Last year & before funding was said to be no problem according to some. And, some still seem to think it isn't. Cooper's political ploy exacerbated the problem. Now a few want the rest to fund their desires. That said 200 out of the traditional high schools should at least temporarily alleviate overcrowding for them. So, there should be no need for building a new HS or adding onto any of the existing high schools in the immediate future if WHS & CHS sends at least 2/3 of the 200 or at least 133 to early college at CCC. Actually their share should be more than 133 one might guess. However, that still leaves overcrowding at WOES with lots of new students in its attendance area on the horizon. What's the most logical path forward? Seems building addition or mobile classrooms at BSE & adjusting attendance areas might be a temporary solution. A new K-12 school is certainly an option to absorb future growth in the west.