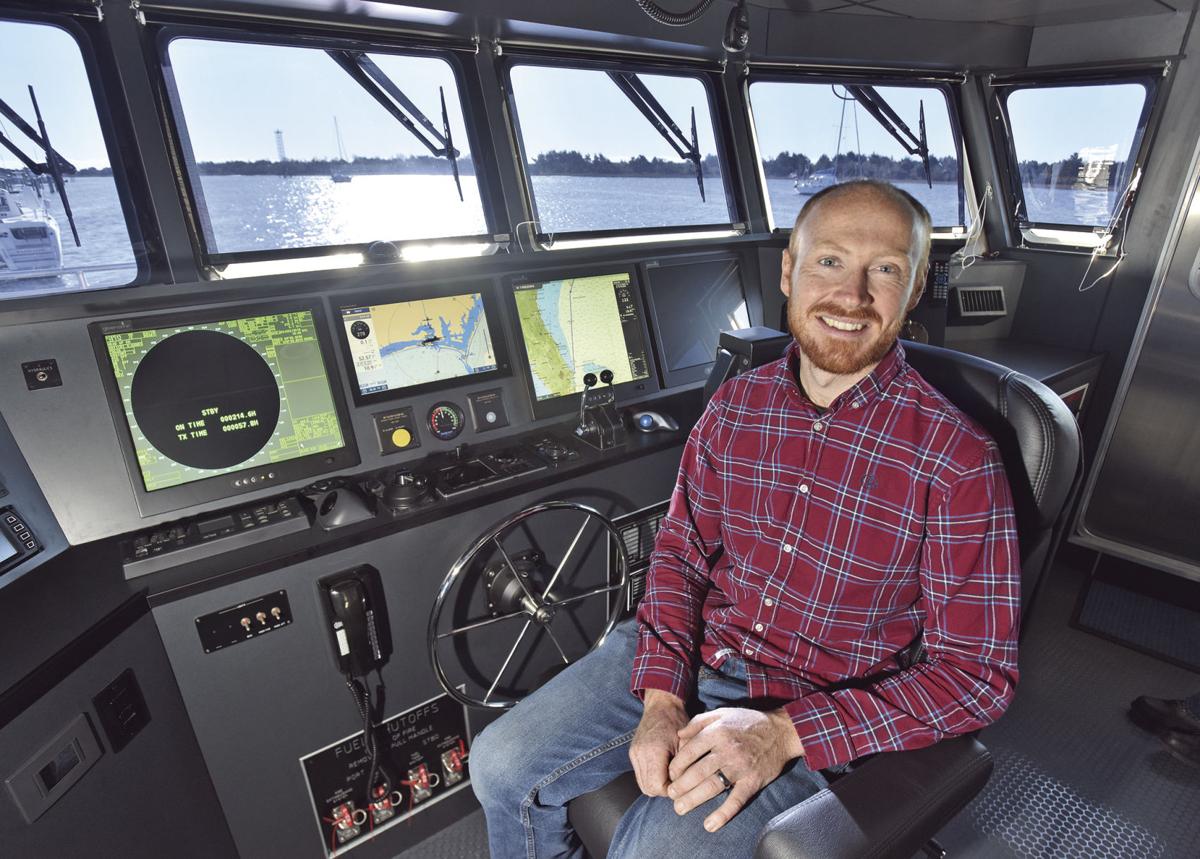 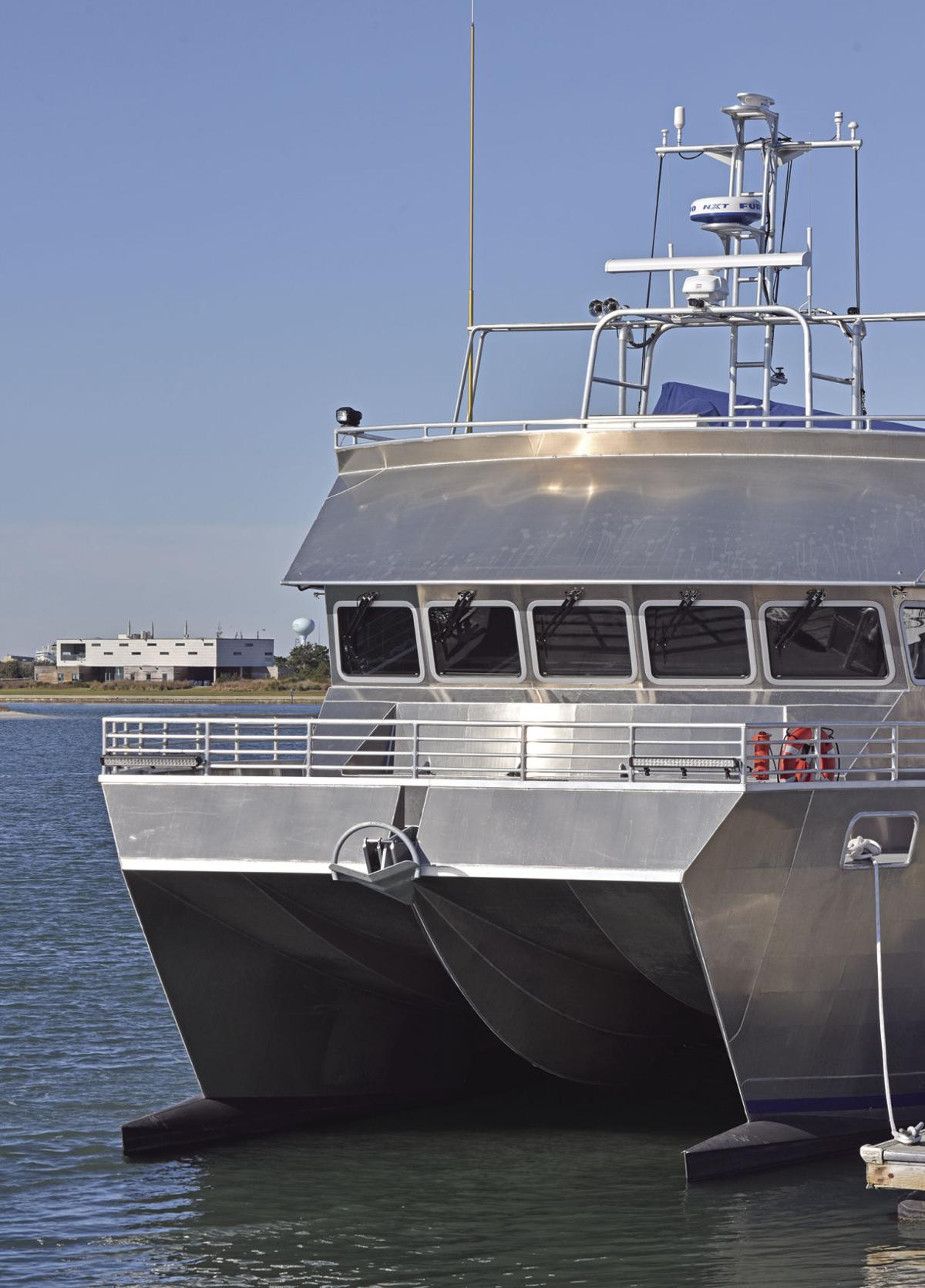 BEAUFORT — The new Duke University Marine Lab vessel has come in, quite literally. The R/V Shearwater is docked along the Beaufort waterfront as of Tuesday.

The research vessel arrived in Carteret County Nov. 26, coming all the way from Bellingham, Wash. The vessel is the latest R/V stationed at the lab since the retirement of the Susan Hudson in 2014.

The lab held a media event Tuesday to give tours of the vessel while the U.S. Coast Guard finishes its final inspections. DUML Marine Operations Manager John Wilson said lab staff and faculty have been talking about getting a vessel like the Shearwater for about 10 to 12 years.

“I don’t think we could’ve asked for a better design,” Mr. Wilson said. “The vessel has three missions: oceanographic research, education support for Duke classes and classes from other institutes and community outreach.”

The Shearwater is a 77-foot-long by 26-foot-wide aluminum catamaran, which Mr. Wilson said helps keep it steady out on the open ocean and prevents it from rolling. With two 800-horsepower engines, he said a trip from DUML to Miami, Fla., is well within its capabilities.

“We can carry a total of 32 people for short day trips,” he said. “We have space for 15 (passengers) overnight.”

The Shearwater comes to the Duke lab packed with a variety of features to support scientific endeavors. On the outside, Mr. Wilson said, it’s equipped with a crane, an A-frame and three scientific winches, all for raising and lowering a variety of devices, as well as a 15-foot outboard boat. A pattern of tie-down bolts on the deck allows for up to 600 pounds of gear to be secured.

Inside the Shearwater, the vessel comes equipped with air conditioning and the facilities to generate up to 700 gallons of hot water, allowing the crew to take hot showers while on the water. Both wet and dry lab facilities are available, and the vessel comes equipped with a multi-beam sonar, a sea surface measurement system and a conductivity, temperature and depth unit.

Mr. Wilson said all data gathered on the Shearwater is compiled and sent to a repository – called Rolling Deck to Repository, or R2R – which holds data from research vessels around the world.

“That repository is very meaningful,” he said.

Up on the bridge, the vessel’s radar and navigation systems are integrated. Mr. Wilson said with the systems seafarers can determine the distance between the vessel and other objects, enhancing the safety of the vessel and making it easier to navigate around hazards, even when visibility is low.

While the Shearwater has only been in Carteret County a few days, its first excursion is already scheduled. Mr. Wilson said in January the DUML will deploy the vessel to Miami to pick up a group of Duke oceanography students, and more projects are soon to come.

“There’s quite a few things in the works,” Mr. Wilson said. “There’s some work with NOAA (the National Oceanic and Atmospheric Administration)…we’re talking about a Bahamas trip.

While the vessel may have arrived, DUML doesn’t have a place to dock it at the lab itself. Mr. Wilson said the lab’s docks, which at 30-plus years are past their useful lifespan, are being demolished and lab faculty and staff plan to replace the fixed docks with floating ones sometime in April.

WOW! 5 million dollars for a "research" vessel and the first thing on it's agenda is making a run to Miami Fla just to pick-up a group of students? And, planning a trip to the bahama's??? Even if the money was a gift, My God.... this is the best use for that amount of money? And folks wonder why tuition and taxes are so high?

Didn't notice any cup holders in the photo.

Maybe an errant torpedo can settle the issue of wasted tax dollars. Navy?

Picking up Miami students? Wow, don't we have a lot of money. Wouldn't it be cheaper to just fly them here commercial? Heck, even a private jet would be cheaper.

Lets all hope this group can make better decisions in the future cause who ever made the decision to send the new vessel to Miami to give a handful of students a lift home certainly did not make a wise decision.

Easy now guys! This is Duke University here. A supposed private upper tier institution of learning. Quite well endowed, funded, so the talk goes. No notable environmental discoveries yet but there is always tomorrow. Isn’t there? The client base, students et al, are quite familiar with Miami and the Bahamas so why not go where the money is. All in the name of science, is it not? Kind of like going to Vegas or Myrtle Beach for a poverty convention. Did I fail to mention there is a crane on the stern? No visible cup holders but plenty of AC. Shockingly, this vessel is powered by fossil fuels and not by climate saving renewables. Must have missed something here but in the name of science we do make an exception or two. Don’t we?