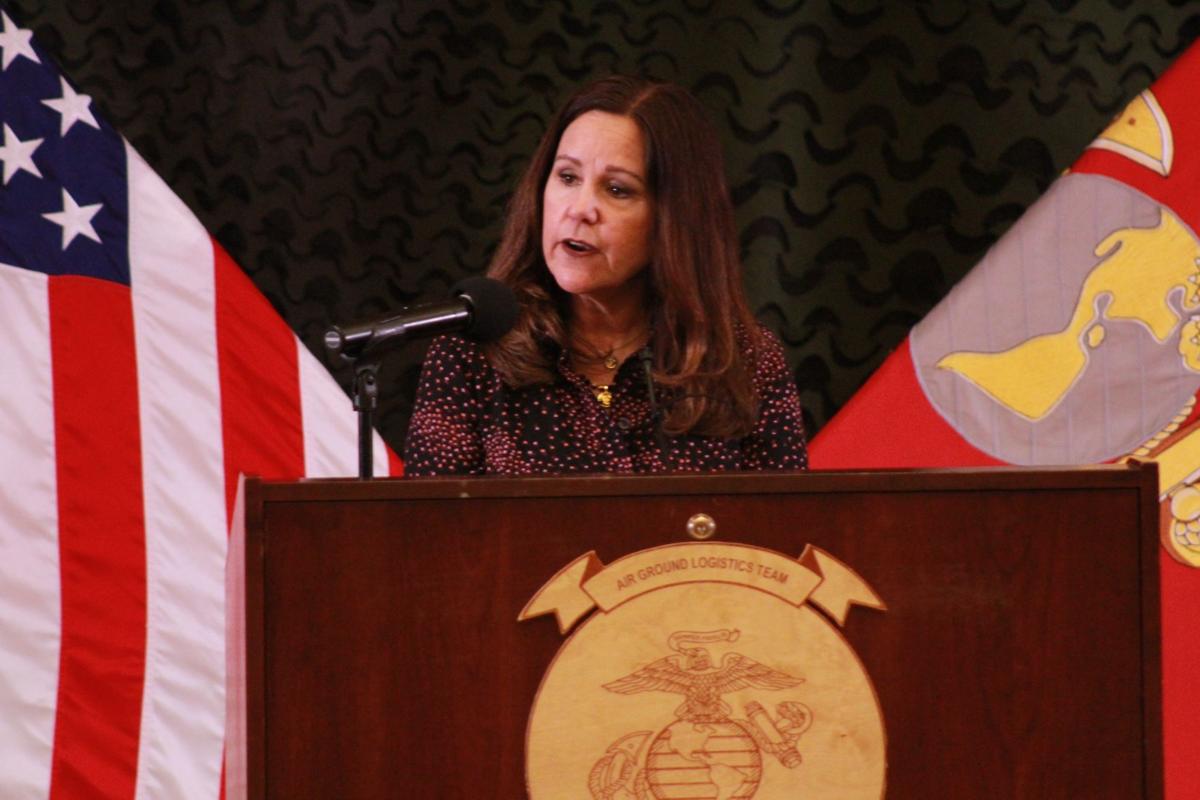 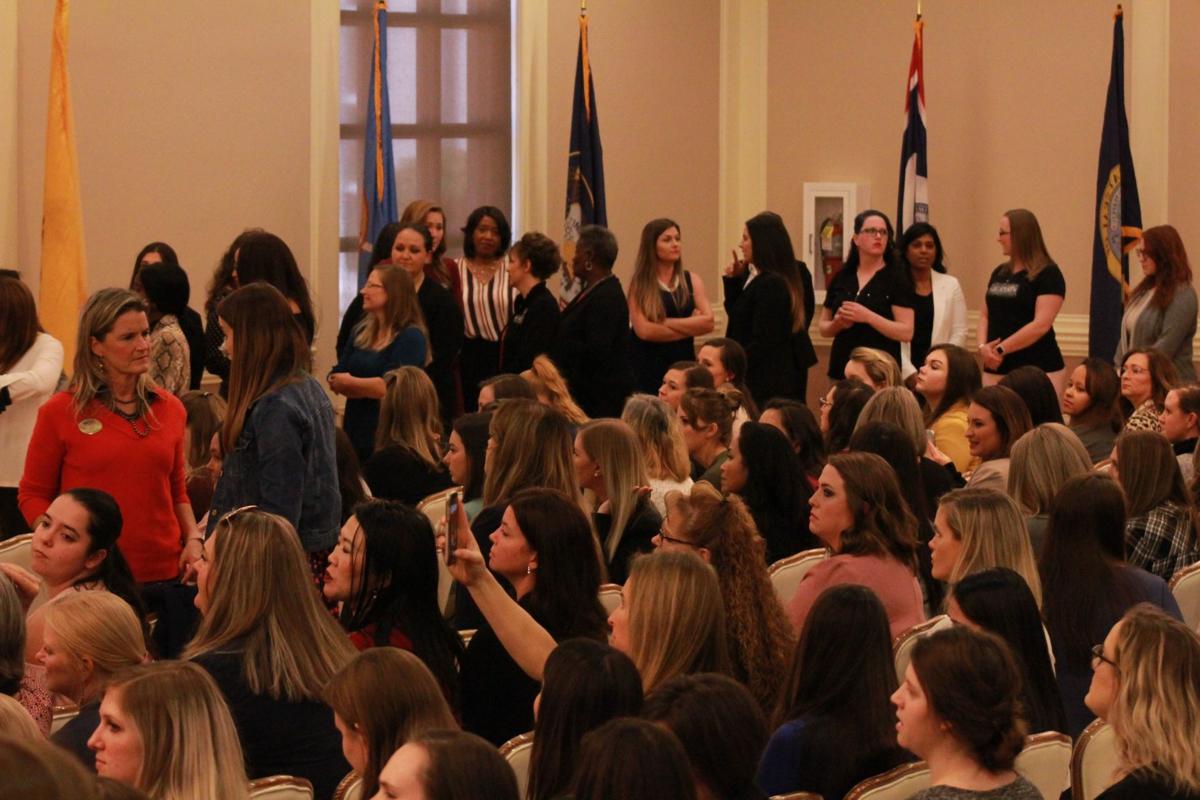 CAMP LEJEUNE — Second Lady of the United States Karen Pence visited Marine Corps Base Camp Lejeune Thursday to meet with military spouses and share information about her office’s initiatives to improve the quality of life for those spouses, including helping them find employment.

Ms. Pence was joined at Camp Lejeune by Leah Esper, wife of Secretary of Defense Mark Esper. Ms. Esper introduced Ms. Pence to the crowd of more than 350 military spouses who gathered in the auditorium of Marston Pavilion aboard the base.

In her opening remarks, Ms. Esper noted she is a military spouse herself, so she knows first-hand some of the challenges faced by military families. She said Ms. Pence has made it a goal to improve access to resources that help military spouses find employment and other opportunities that have historically been difficult to obtain for a variety of reasons.

“Mrs. Pence has made significant strides to elevate and encourage military spouses,” Ms. Esper said. “She is helping more Americans understand the role of military spouses and she has been working on important ways to help create employment solutions for military spouses.”

Ms. Pence said she, too, understands the difficulties of being a military family as she is a mother and a mother-in-law to military spouses. In the fall of 2018, she launched an awareness campaign to elevate the interests of military spouses and shed led on the issues they face.

“I’ve met with thousands of spouses across the United States and around the world and I wanted to say to you, we see you, we thank you and we stand with you,” she said. “You experience frequent moves, job changes, periods of being a single parent while your loved one is deployed, all while exhibiting pride, strength and determination.”

One of the greatest challenges military spouses face is finding steady employment, especially because the military often requires frequent interstate moves. To that end, Ms. Pence is pushing for professional occupational licenses to be transferrable between states so military spouses don’t have to recertify every time they move.

“We know that military spouses struggle to recertify their occupational licenses as they move, and on average they move every two to three years,” she said. “Approximately 34 percent of military spouses work in field that require a state license in order to practice.”

Ms. Pence said Secretary Esper recently agreed to fund an interstate compact allowing licenses to transfer between states. In addition, the governors of several states have signed on to look at occupational licensing regulation reform.

Ms. Pence also touted some of the provisions in the National Defense Authorization Act signed by President Donald Trump in December, including one that allows military spouses maintain their state of residency for business purposes if they move out of state due to a change of station.

Finally, Ms. Pence said she is urging businesses to join the Department of Defense’s Military Spouse Employment Partnership. Those businesses who have joined the network commit to hiring, promoting and retaining military spouses, and Ms. Pence said so far, they have hired more than 141,000 of them. There is also a push for the federal government to hire military spouses.

“It’s exciting to see companies around the nation answer this call to action,” she said. “…We know we have a lot of work to do addressing the employment challenges, but we are taking a hard look at how we can help improve your quality of life.”

Arielle Gagliardi is married to a Marine stationed at Camp Lejeune and attended the second lady’s speech Thursday. She said although she has a job on base at a child development center, she has found it difficult to find employment in her chosen career field. She has a bachelor’s degree in psychology and a master’s degree in forensic psychology and she would like to work for the Naval Criminal Investigative Service.

“In California (where her spouse was previously stationed) it was challenging to find a job. Just moving into California, not having any experience, not knowing anybody, going into interviews was a real challenge,” she said.

Ms. Gagliardi said there are some resources for military spouses like her, but they aren’t very accessible or useful in all cases. Though she is still searching for employment in her field, she did appreciate that Ms. Pence and others are aware of the problems military spouses face.

“It was really awesome to know that she’s really supporting military spouses and wanting to help us get careers and be able to keep that career even if we do move,” Ms. Gagliardi said. “It’s something that I think is on a lot of our minds and something that’s very challenging and we didn’t know someone was behind us, pulling for us.”