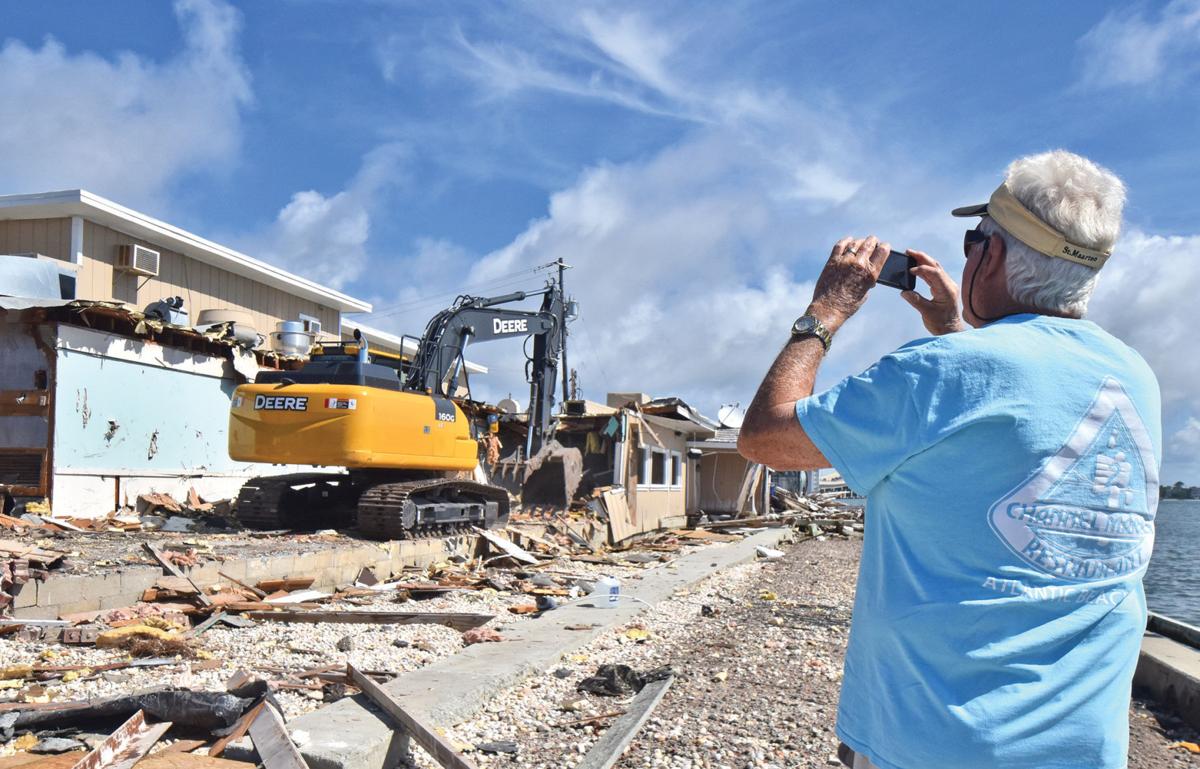 Bill Downey, right, of Raleigh, takes photographs of the Channel Marker restaurant Tuesday as it is demolished near the base of the Atlantic Beach-Morehead City high-rise bridge in Atlantic Beach. (Dylan Ray photo) 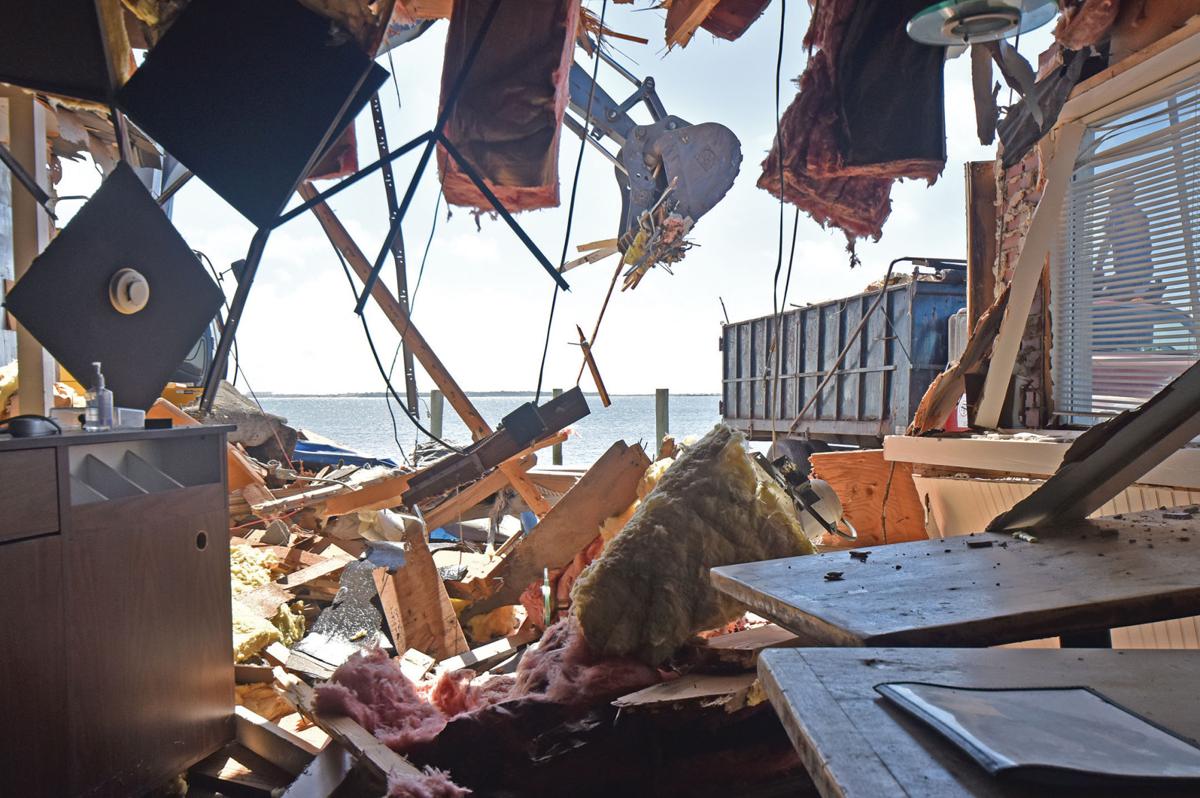 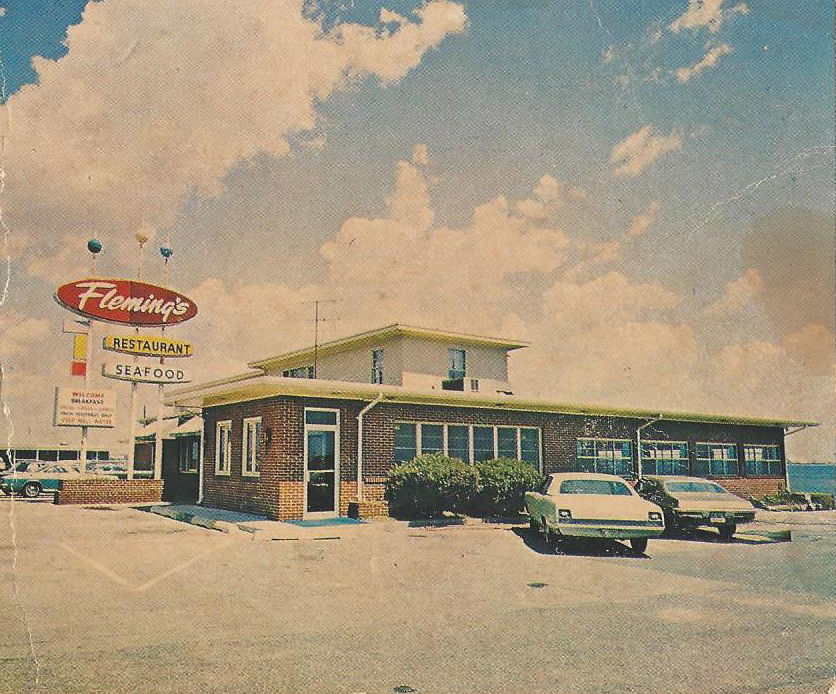 An old postcard shows the Channel Marker of the past under a previous name. (File photo)

Bill Downey, right, of Raleigh, takes photographs of the Channel Marker restaurant Tuesday as it is demolished near the base of the Atlantic Beach-Morehead City high-rise bridge in Atlantic Beach. (Dylan Ray photo)

An old postcard shows the Channel Marker of the past under a previous name. (File photo)

Tuesday morning, S.F. Ballou Construction crewmen were at the closed-up restaurant, located at the foot of the Atlantic Beach Causeway bridge. The sound of breaking wood and heavy equipment filled the air as a backhoe pulled down roofing and walls, depositing the chunks of debris into a dump truck. S.F. Ballou owner and operator Sammy Ballou was at the job site Tuesday.

“We got the job about two months ago,” Mr. Ballou said, which would put the time his company was hired to demolish the Channel Marker in April. “There’s six partners in this deal; they put it (the demolition contract) out to bid.”

Mr. Ballou said town officials condemned the building; he said there were mold problems and other issues. Atlantic Beach Planning and Zoning Director Michelle Eitner, however, said the building hadn’t been officially condemned, though shortly after Hurricane Florence it was posted as unsafe for occupancy.

Mr. Ballou said one of the partners involved is Bill Downey. News-Times staff contacted Mr. Downey, who said he and his partners, whom he declined to name, didn’t have any plans for the property at this time other than to sell it.

“We’re tearing the building down to be good citizens,” Mr. Downey said. He further said he and his partners didn’t want to leave a derelict building to become dilapidated and unpleasant to look at, as well as become a potential health and safety hazard.

The restaurant was closed and the property put on the market by its owners in October 2017.

My thoughts exactly, it has been a eyesore far longer than the Channel Marker. As the main entrance into Atlantic Beach it has been a negative view for years to newcomers and residents alike.

The Showboat was a family owned motel . You would have to understand the history of the family and the animosity that existed between them and the town for years. It stems from their desire to condo it to maximize investment needed to rehab / rebuild it . They also felt that the Channel Marker received preferential treatment when there was a disagreement between the 2 entities . Roger Crowe was is a principal partner in the C M . It goes Without saying he is probably the most successful attorney in CC and his connections run deep.