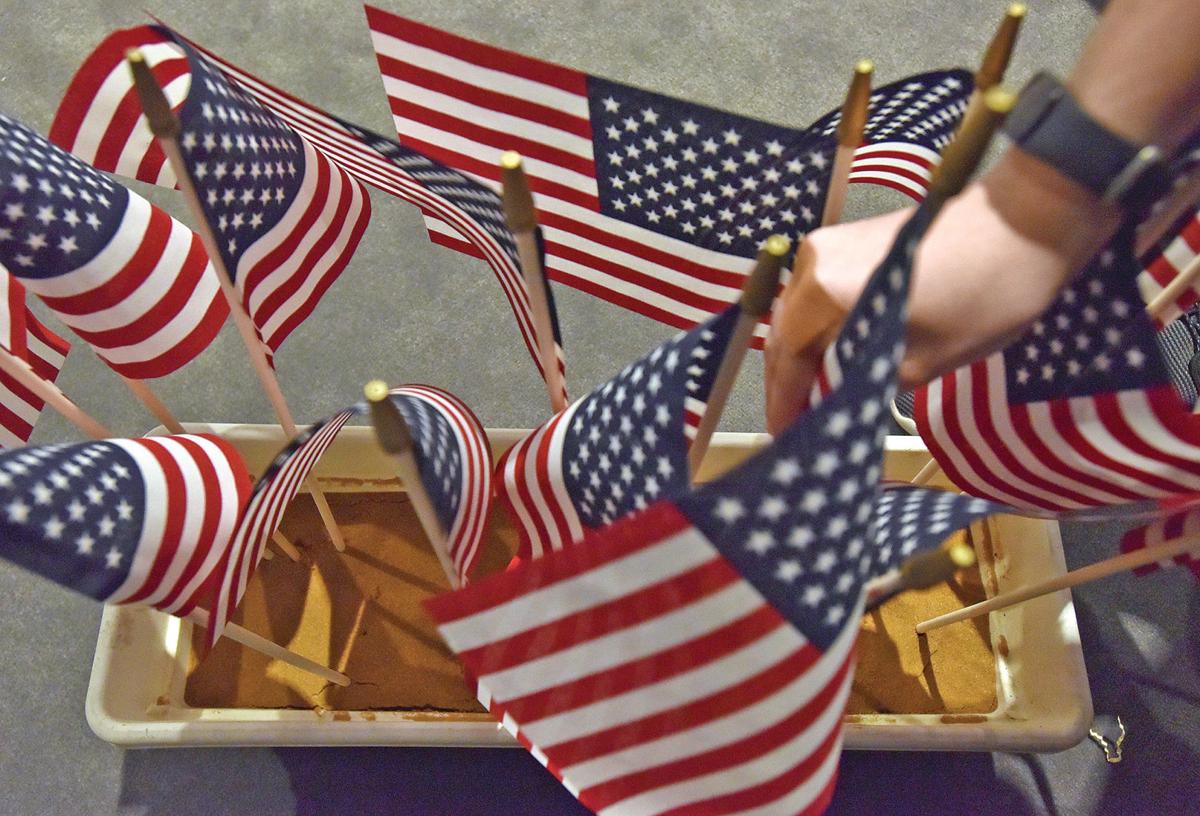 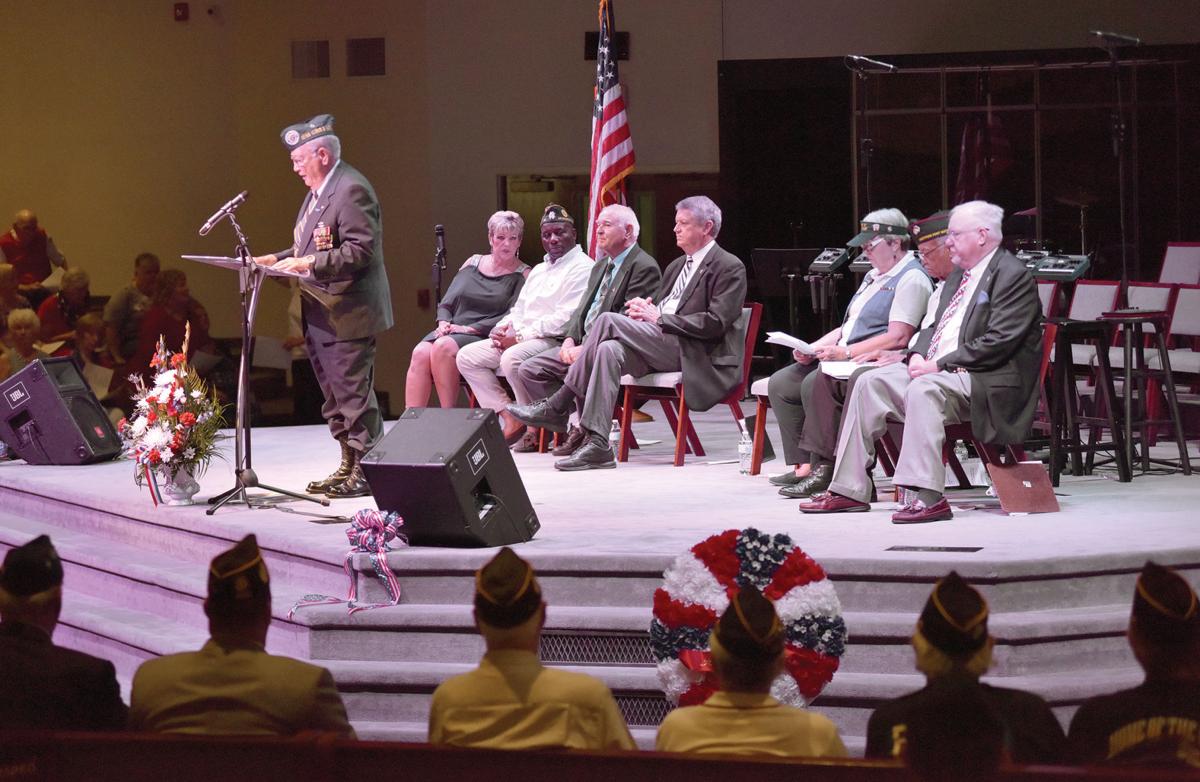 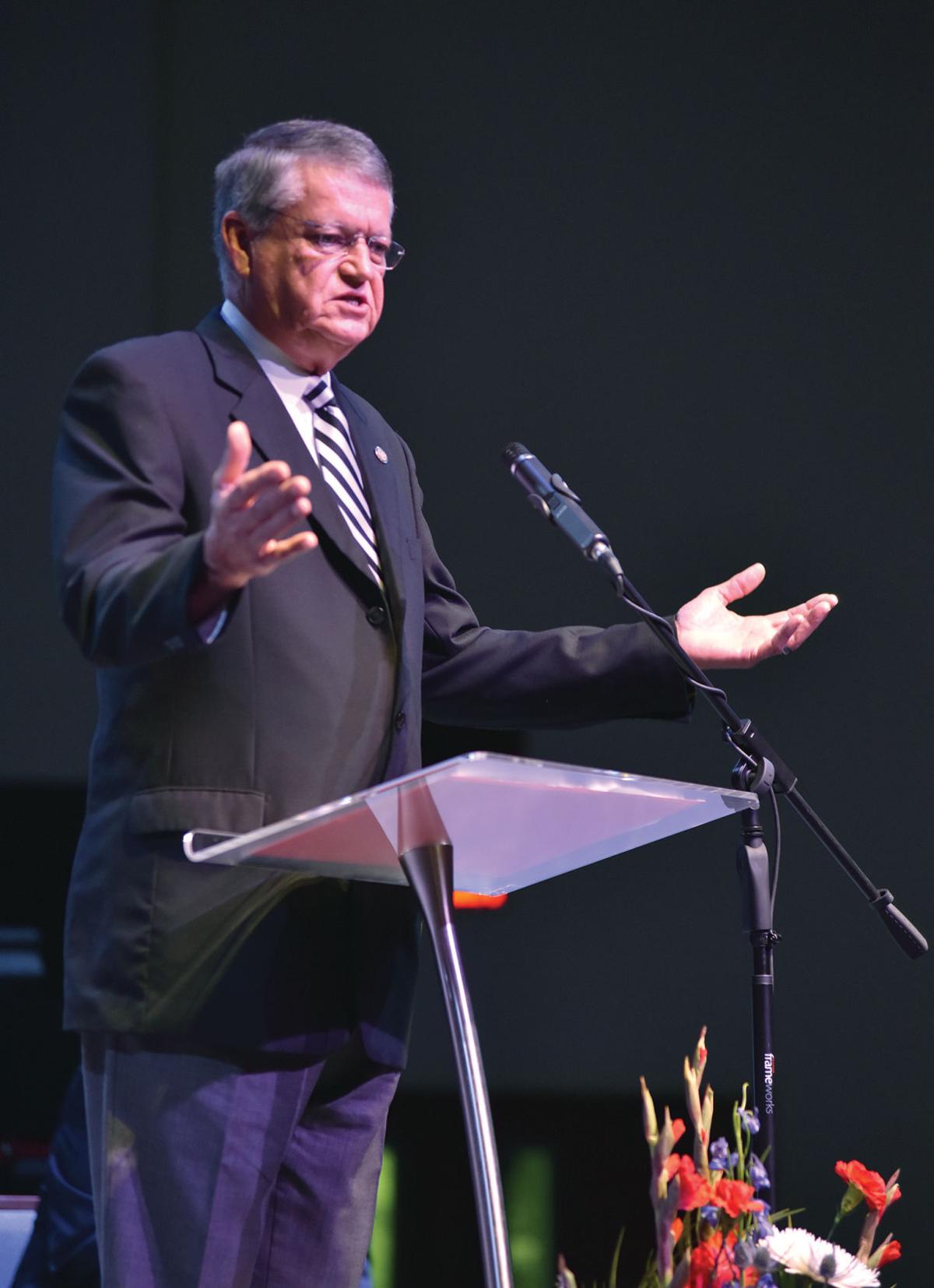 Sen. Norman Sanderson, R-Pamlico, conveys his gratitude and appreciation for those who gave up their tomorrow for our today during a Saturday service at Glad Tidings Church in Morehead City. (Dylan Ray photo)

Sen. Norman Sanderson, R-Pamlico, conveys his gratitude and appreciation for those who gave up their tomorrow for our today during a Saturday service at Glad Tidings Church in Morehead City. (Dylan Ray photo)

MOREHEAD CITY — Many in the county gathered Saturday to show their respect to those who paid the ultimate price for our freedom.

Veteran’s Services Officer Hank Gotard said he was pleased with the venue switch and the department might use the space in years to come.

“We’ll be here. They’ve been so amiable to helping out,” Mr. Gotard said, noting the church was a special part of Saturday’s service.

“This is such a special day for us and America,” Mr. Gotard said.

He also said the service is “an opportunity to show who we are, who we wanted to be and who we should be.”

The service included a patriotic musical prelude with the Carolina East Singers and Angela Baker, an award-winning musician and songwriter, who has been participating in the ceremony for more than 30 years.

She was also pleased with the venue change.

“This is the most wonderful thing that has happened for the veterans’ association,” she said. “I think this is a big step up for this program. I think we are going to have a great show today.”

“Those veterans gave their tomorrows for our todays. Our veterans’ sacrifice is meaningless without remembrance,” Mr. McCammond said. “It is important to our American heritage that all citizens are aware of and recall on special occasions the ultimate sacrifice of their fellow countrymen during periods of war.

“Far too often the citizens of our nation take for granted the freedoms that we inherited. Those freedoms were paid for with the blood of many patriots. Those patriots are honored and remembered on this special day,” he continued.

Sen. Sanderson echoed the thoughts and asked the gathered to remember loved ones, families and friends who made the ultimate sacrifice.

He started his speech by saying he was honored to be involved and paid homage to one of the service’s former speakers, the late Walter B. Jones Jr., who died in February.

During his speech, Sen. Sanderson stressed the importance of freedom and how it needs to be cherished above all else. He also said the nation should never forget those who have provided freedom in the past and those who will continue to fight for it in the future.

“It’s amazing sometimes how easy it is to forget how we’ve gotten to where we are,” he said. “… When it comes right down to it, it’s our military that gives us the right and the affordability for all the things we enjoy as American citizens.”

Sen. Sanderson said people will do many things over Memorial Day weekend, but remembering those who died for the country should be at the forefront of the celebrations.

“We can’t ever repay the debt and all the strains that have come with the loss of just one single military person fighting somewhere, whether it’s here in this nation or whether it’s on foreign soil. We’ll never fully know all the intricate threads that by losing that one person, and we can multiply that by hundreds of thousands of times, how much that has affected the future of our nation,” Sen. Sanderson said. “Because we don’t know the gift and the talents and the things that God put in them to be released when they volunteered and stepped forth and put on the uniform and took an oath and went off to fight at the direction of our nation.”

He also mentioned the upcoming anniversary of the Battle of Normandy, also known as D-Day, June 6, 1944.

Last September, Sen. Sanderson said he had the opportunity to visit the beaches of Normandy, and during the ceremony he felt moved to share some pictures of the area and to mention the impact of the battle and those who died there.

“May we never forget that freedom isn’t free, and it never will be,” he said.

At the end of the ceremony, the crowd was invited to place flags at a wreath to remember those who gave their lives in service to the nation.

‘Far too often the citizens of our nation take for granted the freedoms that we inherited. Those freedoms were paid for with the blood of many patriots.’

Just one of the many times our Finest were called upon.