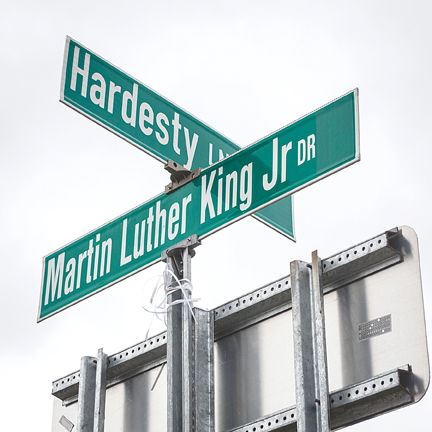 In February, Winston-Salem Council members approved the renaming of Lawrence Street to Hardesty Lane, in honor of Beaufort-born Charles Hardesty who died in January 2013. The street runs along his restaurant and fish market, Forsyth Seafood. (Andrew Dye photo, Winston-Salem Journal) 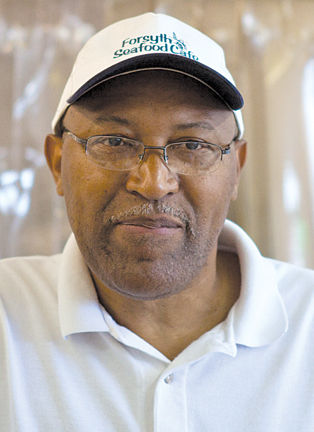 In February, Winston-Salem Council members approved the renaming of Lawrence Street to Hardesty Lane, in honor of Beaufort-born Charles Hardesty who died in January 2013. The street runs along his restaurant and fish market, Forsyth Seafood. (Andrew Dye photo, Winston-Salem Journal)

The late Mr. Hardesty, a graduate of East Carteret High, co-owned and operated Forsyth Seafood, a longtime fish market and restaurant in the area.

He was recognized as a distinguished member of the Winston-Salem community at Sunday’s service, with the rebranding of Lawrence Street to Hardesty Lane. Council members approved the name change to the road running along the north side of the seafood market at their Feb. 16 meeting.

“It’s quite an honor when recognized with something like this,” his wife, Virginia Hardesty, told the News-Times. “We hadn’t thought of anything like this. He was a very quiet, hard-working man.”

Born in 1953 to Beaufort’s Janie and William Lloyd Hardesty, the grandchild of Martha and Aaron Bell, Mr. Hardesty served as a quarterback and pitcher for the East Carteret High football and baseball teams.

Both Mr. and Mrs. Hardesty graduated as Mariners, in 1971 and 1975 respectively, before moving away to attend college.

Mr. Hardesty earned a bachelor’s in industrial arts from Elizabeth City State University while playing quarterback. Mrs. Hardesty holds a bachelor’s from N.C. A&T University, along with an MBA from Wake Forest University.

Following college, Mr. Hardesty returned to the work force along the Crystal Coast, serving as a Beaufort recreation site director.

“He had a passion for youth that allowed him to mold the lives of young men he came across in his work,” brother-in-law Curtis Oden Jr. wrote in a statement from the family.

The pair has close ties to Carteret County, Mrs. Hardesty said, and their venture with Forsyth Seafood in 1984 allowed them to bring their Crystal Coast heritage to the Triad.

“We got back to our roots of seafood when we started the business,” she said. “We started in the back of a truck, driving to Beaufort and coming back with fresh fish.”

The successful business evolved over the years, with the market moving to its current location, a corner lot on Martin Luther King Jr. Drive in Winston-Salem, in 1991 and incorporating a take-out café.

A second Forsyth Seafood restaurant site was sold to make way for a minor league baseball stadium for the Winston-Salem Dash, according to Mrs. Hardesty.

Mrs. Hardesty and their daughter, Ashley, now operate the Martin Luther King Jr. Drive location, employing about 20 locals, but the seafood market has changed, she notes.

“When we first started, we got everything from down there,” Mrs. Hardesty said in a phone interview from Winston-Salem Tuesday. “But we haven’t been able to get as much. We’re still hopeful.”

In part, the Crystal Coast’s tourism industry has moved into locations previously reserved for commercial fishing, she said, and demand outpaces production.

But the Hardestys still maintain relationships with area fishermen, aiming to bring North Carolina, Down East-caught product to the Piedmont.

At its February meeting, Winston-Salem Council moved as part of the consent agenda to honor Mr. Hardesty’s entrepreneurial and community efforts.

According to city staff, 11 adjoining property owners signed a petition in favor of the street renaming.

Hardesty Lane now marks his involvement both in service through the family church and a mission feeding the hungry and homeless each Wednesday, according to the family.

Those efforts continue, Mrs. Hardesty said, with the seafood business hosting fundraisers and investing in the campus community of Winston-Salem State University.

Mrs. Hardesty said the recognition is welcome, but the mission is straightforward.

“Here in the community, we try and do as much as we can to bless others, as we’ve been very blessed.”