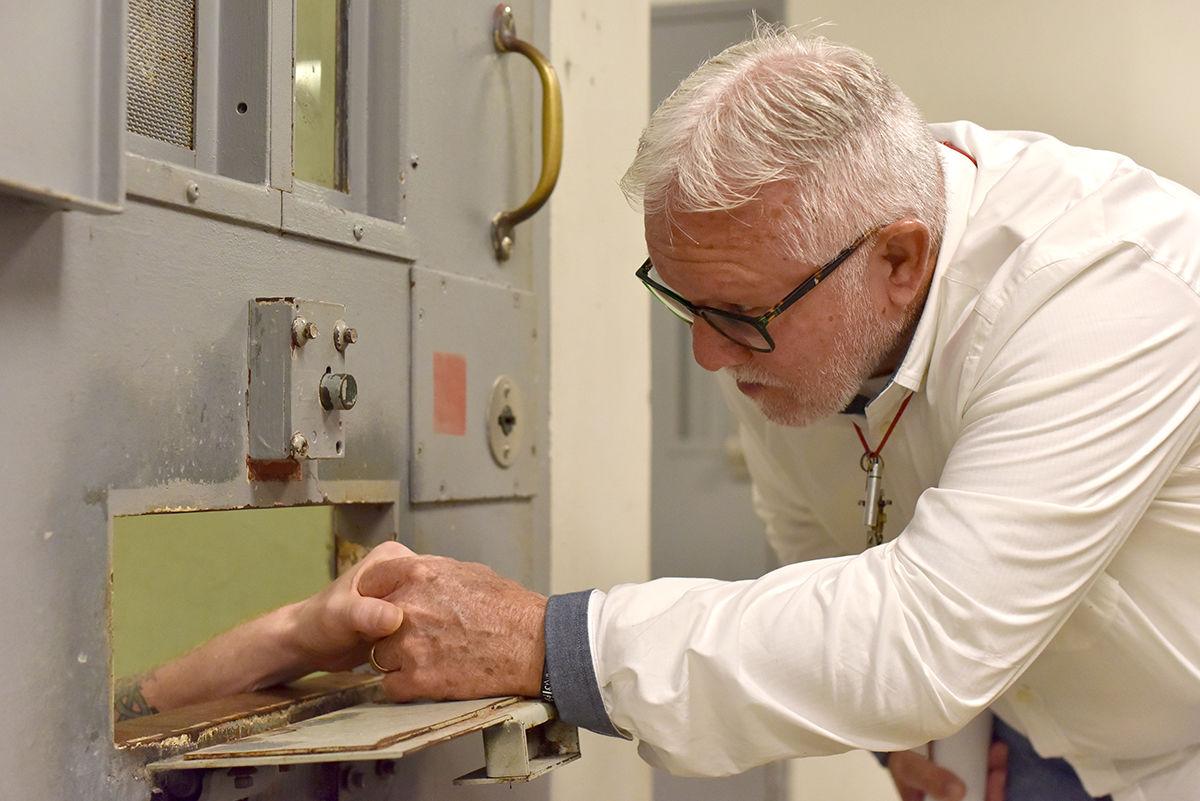 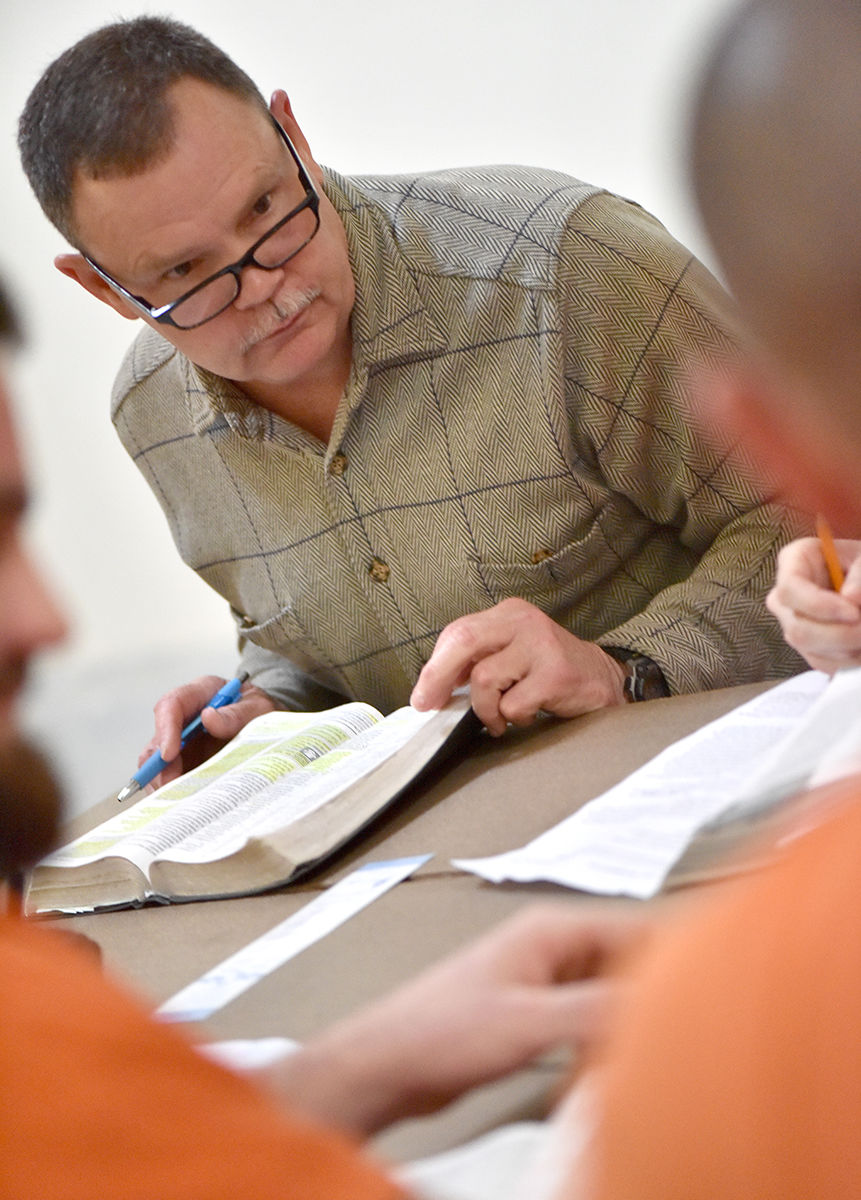 Will Bundy, top left, leads a prayer and discussion group Friday for inmates of the county jail in Beaufort. (Dylan Ray photo)

Will Bundy, top left, leads a prayer and discussion group Friday for inmates of the county jail in Beaufort. (Dylan Ray photo)

BEAUFORT — A group of 10 men in orange jumpsuits sits around a conference table in a high-ceilinged room off the main concourse of the county jail, poring over Bible verses and talking quietly amongst themselves.

The men, prisoners in the county jail, are led by three employees from Hope Mission, a Morehead City-based nonprofit that assists those struggling with homelessness and substance abuse issues. The group meets every Friday for a mentorship program during which they participate in a variety of activities, from Bible study to Alcoholics Anonymous-style meetings. A similar group for women meets directly after the men finish up.

“We’re investing in those individuals that come in there,” said Gene McLendon, director of Hope Mission. “We meet with them, hear their stories, finding how we can help them not only while they’re here, but we can help them once they’re released, whether they come to us or they don’t come to us.”

The mentorship program is one of the ways the county is working to rehabilitate prisoners and, in effect, ease overcrowding in the county jail. Though Hope Mission is not a county-affiliated entity, it works closely with the Carteret County Sheriff’s Office and the court system to help prisoners during and after their jail sentences, with the goal of keeping people from committing further crimes and instead integrating them back into society.

Jail overcrowding is a major issue for the county’s facility and others throughout the state, according to Carteret County Sheriff Asa Buck. The jail in Beaufort can hold up to 116 inmates, but the total population almost always exceeds that, sometimes reaching 200 inmates in the jail at a given time.

When the jail can’t hold all its prisoners, some get sent to other county jails, on Carteret County’s dime. Sheriff Buck said it costs the county $50 per prisoner per day to house inmates in other facilities, plus transportation costs and all the prisoner’s associated expenses while they are in another facility. Since many nearby counties are struggling with the same jail overpopulation issues, some inmates end up in facilities hours away.

“(It) is becoming increasingly difficult for us to find those beds because other jails are having the same problem that we are,” Sheriff Buck said.

The county has conducted a jail study and is looking at expanding the facility, but that project is still several years away from coming to fruition.

Another initiative aimed at easing jail overpopulation is a pre-trial release program that allows some offenders to wait out the time between arrest and adjudication from the comfort of home rather than in a jail cell. The county can keep track of those individuals through an electronic monitoring program, which Sheriff Buck said has existed for more than 10 years.

“It’s a multi-faceted, multi-purpose program,” he said. “It does help us to reduce the jail population, but it also helps us to help people get their lives back on track.”

The CCSO works closely with the court system and District Attorney Scott Thomas to identify individuals for the pre-trial release program. Sheriff Buck said those who qualify usually have committed misdemeanors or low-level felonies, though individuals are chosen on a case-by-case basis. Violent criminals and those with high-level felonies generally do not qualify.

“It’s not strictly based on someone’s charges,” Sheriff Buck said. “We have to make determinations based on the individual, their previous criminal record, what type of support systems they have in the community, family support, mental health and substance use issues.”

While the electronic monitoring program has been around for a while, not many people know it exists, and Sheriff Buck is looking to expand it in the coming years. For most of its existence, there was only one sheriff’s deputy in charge of overseeing the electronic monitoring program, but county commissioners included funds for a second deputy in this fiscal year’s budget, and Sheriff Buck hopes to continue investing in the program.

The county’s electronic monitoring program also identifies individuals on probation who can be sent to treatment facilities and rehabilitation programs for substance abuse and mental health problems. Some end up at Hope Mission for an intensive, six-month residential program in which they receive counseling and gain skills to enter back into society. Others go to inpatient or outpatient facilities throughout the region.

Many people in the judicial system struggle with addiction, so curbing substance abuse and getting people into recovery is a major way to prevent criminals from reoffending and help them become productive members of society, according to Sheriff Buck. Though the county has not tracked recidivism rates, he said, anecdotally, the programs seem to help cut down on repeat offenders.

“A lot of people who go through these programs, they don’t come back to jail,” he said. “Were it not for this intervention in their lives, they might end up here again.

“It’s hard for folks to break that cycle and find the help on their own.”

Sheriff Buck said crime is complex issue and no single entity can tackle it alone. But with the help of the county’s various rehabilitation initiatives and strong partnerships with organizations like Hope Mission, he hopes they are making a difference in people’s lives.

“We’re helping people to get their lives back on track, we’re helping to reduce future crime and recidivism, we’re reducing the burden to the taxpayer to provide law enforcement services and jail services,” he said. “It’s just a win-win all the way around.”

Convicted felons suddenly finding religion is nothing new . Often used to give the impression of a change or heart , remorse and on the road to redemption . An early parole and or release is the goal . Some do learn and clean up their act while others become repeat visitors . Selecting who will and who will not repeat is often tainted by the need to make space for the new arrivals .

Looks like they had plenty of room when the Reel brothers were kept in jail for all of those years for trying to keep their property that was practically taken away from them.

If this helps just 1 or 2 then it is well worth the effort.

This is a good and bad statement! If one is reformed then yes it is good but if one gets out and raped or murders again then what? Lock him back up? But he was locked up the first time and was let go to do it again!! NO. My child means more to me than a inmate who says he found god! God will save him in prison just as good as on the street! And my child wife and home is safer with him there too.

Convicted murders and rapists are sent to prison not kept in the County jail. The majority in the jail are drug convictions and thieves.

No all go to jail until they go to trial found guilty and sentenced for there crimes. Now there are a few cases where a offenders are transferred to a prison to be kept as what is called a safe keeper. These are normally for high profile cases or where the offender is causing problems. But yes a murders and rapist and all the others do go to jail! If not why do you need jails if all are going to be held in prison. Just saying Sheepshead is right on this one.

7 million for a new county building and a million for a playground, but jail is still overcrowded and homeless shelters are full. Definitely incorrect priorities

We don't need jails; the liberals say wall are ineffective, so logically jails are not needed. On a serious note, when we have the insanity of all the laws on the books, is it no wonder we have full jails. The Reels Brothers were noted; and a good point it is; that was a gross injustice, indeed. The drug war has failed, and the violence from the drug war is significant. Must we jail everyone?

Speaking of the Reels brothers , how has that played out ? I mean the land and such .