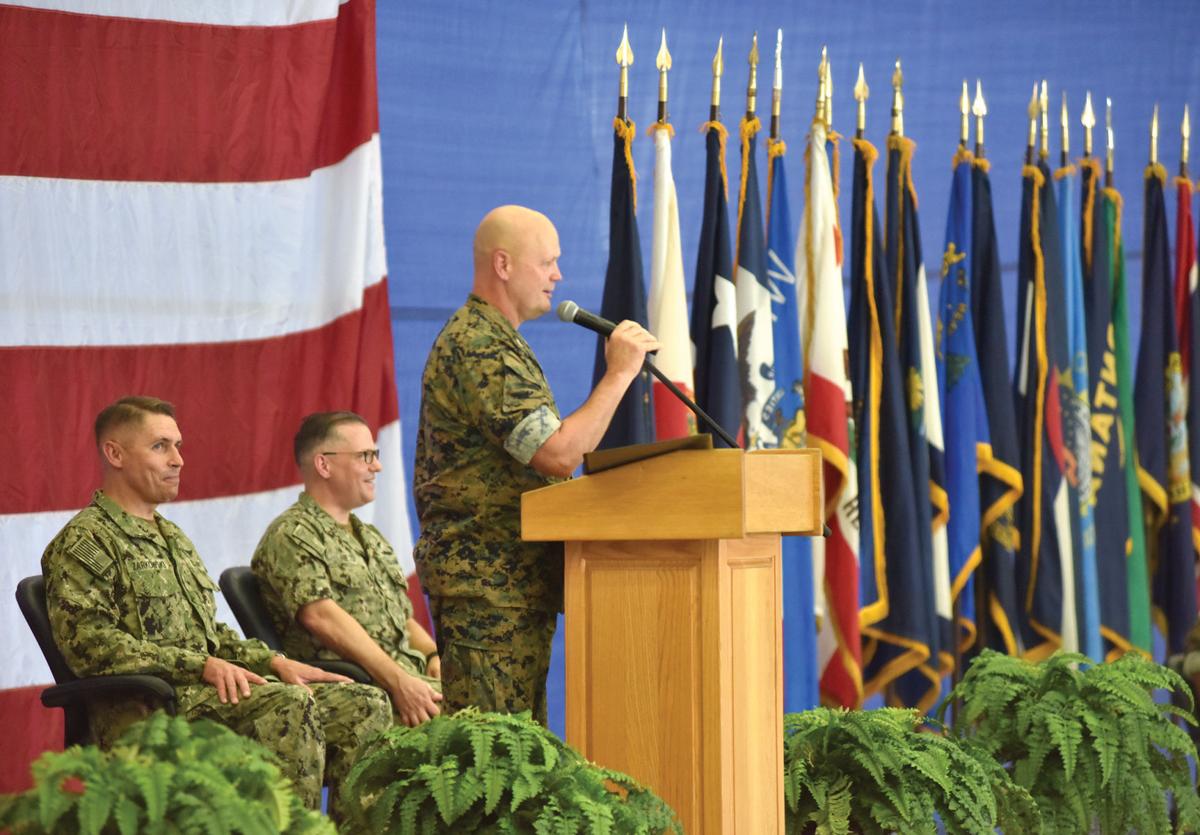 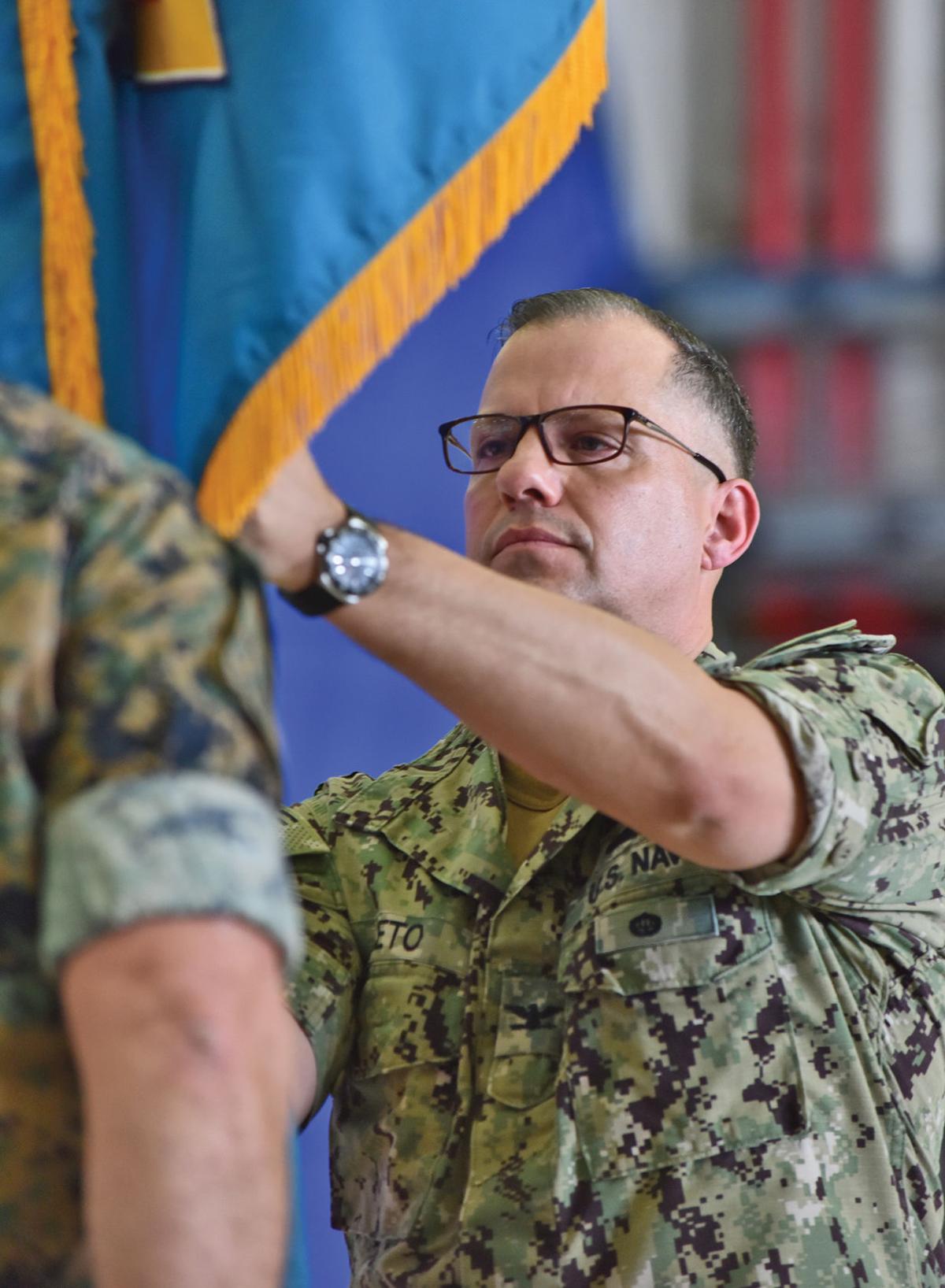 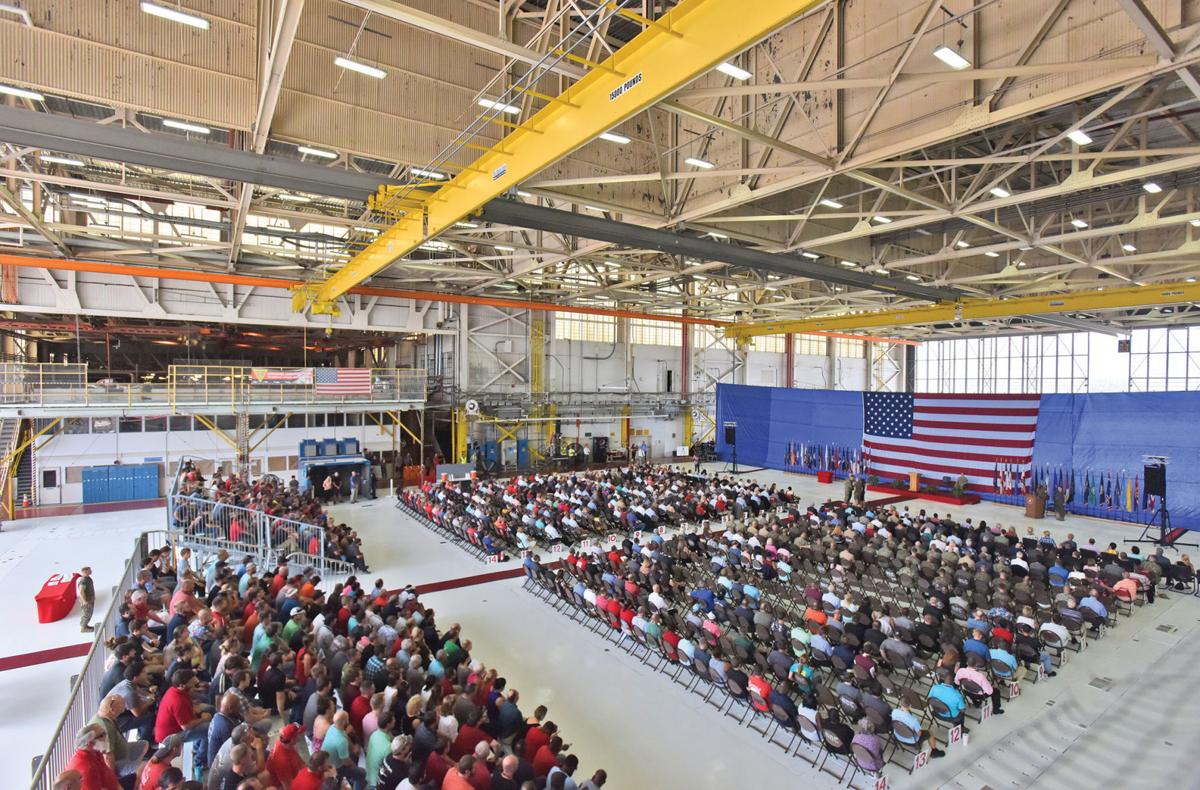 Navy Capt. Mark E. Nieto assumed the role of commanding officer during a change of command ceremony in hangar No. 3 aboard the air station. Capt. Nieto, who has been executive officer of FRC East for the past two years, took over the top spot from Col. Clarence Harper III, who retired Friday after 27 years in the U.S. Marine Corps.

This is the first time in FRC East’s 75-year history a Marine did not hold the commanding officer’s post.

“Let’s talk about the little elephant in the room,” Capt. Nieto said to the crowd of more than 1,000 people, which included family, friends, military officials and FRC East employees. “So, I’m the first Navy CO in this command since its inception in 1943, even though it’s been in Navy command since 1967.”

Capt. Nieto and Col. Harper  served alongside each other in the top two positions at FRC East for the past two years, and after a brief, formal change of command ceremony, Capt. Nieto reflected on their time together in the organization.

“(Col. Harper) has been my friend, mentor and companion at the top of this organization for the past two-and-a-half years almost,” he said. “…Of course I’m ready to take command, but it won’t be the same without you.

“You and Ann and the girls (Col. Harper’s wife and daughters) are wonderful people, and the Cherry Point community and the Havelock community will lose an incredible, positive force when you depart. Good luck in all your future endeavors, please stay in touch and God bless you,” Capt. Nieto concluded.

Col. Harper said after his 27 years in the Marine Corps, he feels ready to retire, and he looks forward to what life will offer him next. He also thanked his wife and children for their support throughout the years.

“I couldn’t have done it without you all,” he said.

Capt. Nieto has several goals he wishes to accomplish during his time at FRC East, especially related to safety, quality and cost. He also pointed out the organization achieved several notable goals under Col. Harper’s leadership, including for safety and environmental compliance.

In 2017, FRC East had the best safety record in its history, and there has been an 83% reduction in workplace incidents since 2000. The organization was also recognized with several honors for environmentally friendly practices, including the Chief of Naval Operations Naval Shore Safety Award for Large Industrial Activity in 2018.

“The employees are the heartbeat of FRC East and the effort we do here,” Capt. Nieto said. “Last year we crested over 4,200 employees, and most of those are civilian, so that’s your brothers, your sisters, your mothers, your daughters, your fathers, your sons in this little community, and I couldn’t be prouder to be here and be part of this command.”

Capt. Nieto said Havelock and the surrounding areas have been particularly welcoming the past two years, and he looks forward to being here a bit longer.

“In 26 years, I have never seen a community that supports a base and a specific command like this one,” he said.

“Since Norma and I have arrived here in 2016, the command, the base and all the local communities have gone overboard in welcoming us in true, unparalleled North Carolina hospitality, and I thank you for that, it’s been a wonderful experience,” he continued.

The incoming commanding officer thanked his wife, Norma, and five-year-old daughter for their support and other family, friends and mentors for traveling to observe the ceremony.

FRC East is a Naval Aviation maintenance and repair depot under the Naval Air Systems Command headquartered in Patuxent, Md. It is one of eight fleet readiness centers located around the world.

FRC East facilities include detachments at Marine Corps Air Stations in New River and Beaufort, S.C., as well as Joint Base McGuire-Dix-Lakehurst, N.J.

The operation provides depot-level for the V-22 Osprey, the AV-8B Harrier, the H-53 Super Stallion, the F-53 Lightning II and H-1 Huey and Cobra helicopters.